EKITI State Governor, Mr. Ayodele Fayose, has urged workers in the state to call off their strike and hold talks with the government.

The governor said the salaries for local government workers were ready for payment, with limited additional funds available for sharing.

However, he said, nothing could be done because civil servants were on strike had critical roles to play in the disbursement of the funds.

Fayose, who spoke on Wednesday in Ado Ekiti through his Chief Press Secretary, Mr. Idowu Adelusi, expressed sympathy with the striking workers and the inconveniences the current financial situation in the country was causing them.

He, however, warned that the financial condition of the country might not get better soon.

The governor said he had foreseen the current situation which made him to be transparent in the handling of finances of the state.

He said, “I have not hidden anything from the labour leaders and what our dear state is experiencing now has been aggravated by th‎e mindless borrowings of the immediate past administration in the state.

“The state is paying about N1bn monthly to service the bond and the commercial loans they took. If that did not happen, we would have had such money to add to our monthly allocations.

“During my first term in office, I was paying salaries regularly and on the 22nd of every month and workers never went on strike. I sympathise with the workers and regret the inconveniences the current financial situation in the country is causing them.

“The situation is not limited to Ekiti State, as the country is on a recession. All these I have foreseen that made me open the finances of the state to all and run an all inclusive financial management.

“Regrettably, it is difficult to give what you don’t have. It is in the interest of the state that the workers need to come to terms with the reality on the dwindling allocations coming to the state because even two months allocations can no longer pay one month salary.

“I implore workers and their leaders to note that even the recent nationwide strike called over fuel price increase was called off for the two sides to go into negotiation and dialogue.”

N3bn loot: Return My Money Back To Me, Yakubu Tells Court

NTDC Boss Removal: Directors At War Over Who Will Act As DG 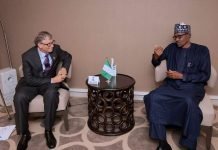