THE Minister of Youths and Sports, Barrister Solomon Dalung, has debunked the rumour that his ministry has directed the Nigerian athletes going for the Olympic Games in Rio to buy their air tickets for the competition, while the refund will be made later. 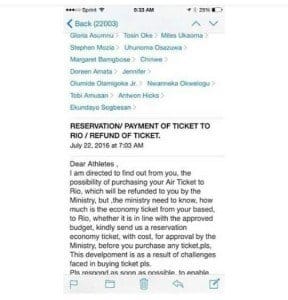 In a statement posted on his Facebook account, and signed by his media aide, Nneka Anibeze, the Minister said that the office of the Director, High Performance, Angie Taylor, has been sadled with the responsibility of booking and arranging for the flights and movements of the foreign based athletes to and fro Rio.

“We did not write any mail asking athletes to pay their ways to Rio. As the overseers of sports in the country, it is our duty to take care of all our athletes. The letter did not come from us and we will investigate the writer of that letter. It does not represent our stand concerning the movement of athletes to Rio and the writer or anybody asking athletes to buy their tickets to Rio will be investigated. We ask Nigerians and athletes in particular to disregard the mail.”

He, however, charged the athletes to remain focused on their build-up to the Rio games that his administration his focused also in doing the necessary thing for the success of the team Nigeria.