One of them, Charles Okah, also alleged that some top federal government officials visited him at Kuje Prisons in Abuja to endorse the second term ambition of the ex-President with an offer of one million US dollars, which he rejected.

Their solicitor, Timipa Jenkins Okponipere Esq., in a statement, yesterday night, confirmed that he had received the instruction of the Okah brothers to sue both Jonathan and Eze.

“It is our client’s brief that the entire contents of the said statement breached their fundamental right to fair hearing as secured and guaranteed to them by the extant provisions of the 1999 Constitution of the Federal Republic of Nigeria (as amended) as well as the African Charter on Human and Peoples Rights (Ratification and Enforcement) Act 2004,” Okponipere said.

The statement, made up of allegations against the former President, read: “Secondly, one of our clients, Mr. Charles Okah, has reacted to and corroborated the recent revelations made by one Cynthia Whyte regarding the unsuccessful attempts made by former President Jonathan to lobby the Movement for the Emancipation of the Niger Delta (MEND) to endorse the former President’s 2015 failed re-election bid. Please find below, our client’s narrative of the saga, to wit:

“The said statement detailing how the Avengers was formed and published in an online news media, Sahara Reporters, revealed that I was visited in Kuje Prison Abuja at night around November 2014 by (names withheld) from former President Goodluck Jonathan to convey a message to the Movement for the Emancipation of the Niger Delta (MEND) to endorse the former President as the group’s choice in the 2015 general elections.

“I can confirm that indeed such a visit took place. I can also confirm that the RNDA account by Cynthia Whyte is correct,” he stated.

His words: “A quid pro quo was then proposed. In exchange for our cooperation, the sum of One Million US Dollars was offered in mint cash. I was shown the money and promised that once the endorsement was released the money will be made available and paid to whomever I mentioned to give it to.

“They promised that the trumped-up charges against my co-accused Obi Nwabueze and I will be dropped, and that Edmund Ebiware, convicted to life imprisonment would be given a Presidential pardon, while there will be no government interference in influencing the outcome of my brother’s Appeal in South Africa.

“Few days later, I contacted my brother Henry and briefed him about the visit. After listening to me, he immediately rejected the proposal in its entirety, disdained the conditional offer for our release, and the $1million bribe, saying we will not sell our birth right for a bowl of porridge. Henry then told me to brace-up myself for another 4 years in prison should former President Goodluck Jonathan gets a second term.

“He believed that God will take care of our families. He then directed me to appeal to MEND to endorse Muhammadu Buhari, a preferred choice and damn the consequences. That was exactly how MEND rejected Ex-President Goodluck Jonathan and endorsed President Muhammadu Buhari,” Charles Okah disclosed.

We Will Not To Bomb Niger Delta —Air Force

Champions League: I Won’t Kill Myself To Win —Guardiola 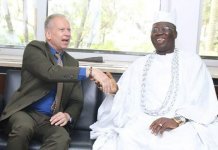