DETAILS of the Executive Orders signed by Acting President, Prof Yemi Osinbajo have emerged revealing a number of decisive policies formulated to ensure the smooth running of different organs of government. Osinbajo had last Thursday signed three Executive Orders at a time many in some quarters assumed that governance had taken a back seat in Nigeria.

The Orders formed part of the initiative by the Federal Government under the Presidential Enabling Business Environment Council, PEBEC, to ensure ease of doing business in the country.

A breakdown of the contents of the Orders which focused on Nigeria’s business environment, local content in public procurement and timely budget submission among others, showed that constraints against doing business were addressed.

Specifically, Osinbajo directed the resumption of 24-hour operations at the Apapa Port and outrightly banned touting by officials or unofficial persons at all airports, land and sea ports in Nigeria.

Also, the Presidency ordered that all valid tourist and business visa applications by foreigners visiting Nigeria would now be processed with 48 hours.

A statement by the spokesman to the Acting President, Mr. Laolu Akande in this regard, quoted Osinbajo to have said thus: “The Apapa Port shall resume 24-hour operations within 30 days of the issuance of this Order and there shall be no touting whatsoever by officials or unofficial persons at any port in Nigeria. Each Port in Nigeria is to assign an existing export terminal to be dedicated to the exportation of agriculture produce within 30 days of the issuance Order.

“On duty staff shall be properly identified by uniform and official cards while off duty staff shall stay away from the ports except with the express approval of the agency head. The FAAN Aviation Security, AVSEC, and Nigeria Ports Authority, NPA, Security shall enforce this order.

“All non-official staff shall be removed from the secured areas of airports. No official of FAAN, Immigration, security agency or Ministry of Foreign Affairs or any other agency is to meet any non-designated dignitary at any secured areas of the airport. A new single interface station at each Port shall capture, track and record information on all goods arriving and departing from Nigeria and remit captured information to the head of the MDA and the head of the National Bureau of Statistics on a weekly basis.

“All agencies currently physically present in Nigerian Ports shall within 60 days harmonise their operations into one single interface station domiciled in one location in the port and implemented by a single joint task force at all times, without prejudice to necessary backend procedures.”

The Acting President also directed that the officially approved list of dignitaries that have been pre-approved to be received by protocol officers shall be made available to AVSEC and other relevant agencies ahead of their arrival at the airport.

“Any official caught soliciting or receiving bribes from passengers or other port users shall be subject to immediate removal from the post and disciplinary as well as criminal proceedings in line with extant laws and regulations.

“All relevant MDAs at the airports shall within 30 days of the issuance of this Order merge their respective departure and arrival interfaces into a single customer interface, without prejudice to necessary backend procedures,” Osinbajo directed.

A statement to that effect by Akande said: “When anyone in Nigeria has an application before a Federal Government agency seeking approval, permit or licence, the agency to which he or she is applying will be responsible for obtaining all further official request for information by any other government agency.

“This means a situation whereby such applicant would be personally running around seeking additional information needed for the consideration of his application by another agency is now over.

“This is because Acting President Yemi Osinbajo has issued directives to Federal Government Ministries, Departments and Agencies (MDAs) to harmonise processing of applications in the business environment, in order to promote ease of doing business in the country

“In the Executive Order, an MDA that requires input documentation, requirements or conditions from another MDA in order to deliver products and services on applications within the originating MDA’s remit or mandate shall only request a photocopy of submitted application or any other proof that would speed up the processing of such application.

“It further stipulates that ‘it shall be the responsibility of the originating MDA to seek verification or certification directly from the issuing MDA’.

“In a major component of the Executive Order on the promotion of transparency and efficiency in the business environment’ signed by the Acting President the directive takes cognisance of the bureaucratic bottlenecks faced by businesses who have to deal with officials and several agencies across the public sector.

“Now, MDAs are to adhere strictly to Service Level Agreements in the issuance of published stipulated timelines for processing of applications for the products and services’.

“Equally, appropriate sanctions under the Public Service Rules are also to be meted out to erring public officials.

“This component of yesterday’s Executive Order signed by the Acting President is under the “One Government” component that promotes inter-agency synergy and transparency offering ease to business and applicants.

“Whenever an application is not determined within the stipulated time by a Federal Government agency, such an application will henceforth be deemed to have been approved, Acting President Yemi Osinbajo directed.

“The directive on default approvals is among other directives signed by Prof. Osinbajo in the present administration’s resolve to promote transparency and efficiency especially in the business environment and generally change the way things are done in public offices.

“Where the relevant agency or official fails to communicate approval or rejection of an application within the time stipulated in the published list, all applications for business registrations, certification, waivers, licenses or permits not concluded within the stipulated timeline shall be deemed approved and granted.

“The Order also stipulated the mode of communication of official decisions to applicants, noting that it shall be stated in the published requirements.

“Where applications are rejected within the stipulated timeline, all rejections shall be given with reasons.

“Rejections of applications shall be tracked and accurate records kept at all times for each MDA and shall be submitted to the head of the MDA on a weekly basis.

“There shall be at least two modes of communication of acceptance or rejection of applications to the applicants by the relevant MDAs before the expiration of the stipulated time, including letters, emails, and publications on MDA websites. 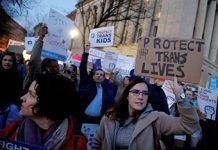 Govnorship Campaign: Edo PDP Disagree Over Use Of Stadium