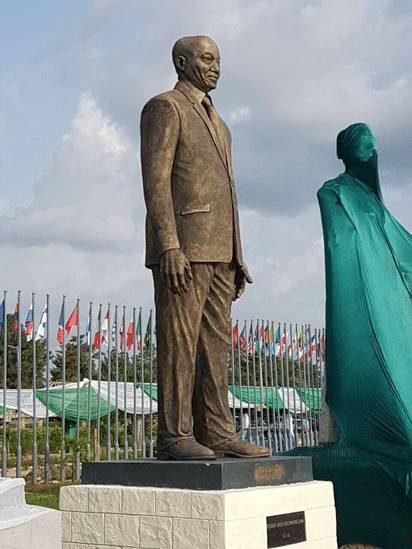 THE ruling All Progressives Congress (APC) has hailed the state governor, Rochas Okorocha for bringing the South African leader to the country.

This, many people interpreted as an endorsement of the reported N520 million statue erected by the Imo state government in honour of South Africa’s President, Jacob Zuma,

At a meeting of its National Working Committee NWC with its 24 state governors and principal officers of the National Assembly, APC National Chairman, Chief John Odigie-Oyegun said Okorocha’s efforts at attracting foreign investment to the country is highly commendable.

“Let me use this opportunity to congratulate you (Rochas) on your birthday…young man, where I was very powerfully represented and for your feat in bringing some of the significant figures from the African continent”, said Odigie-Oyegun in a brief introductory remark before the meeting dissolved into a closed session.

Welcoming participants to the meeting, Chief Odigie-Oyegun thanked God for safely bringing back President Muhammadu Buhari from his medical sojourn in London.

“I welcome you to the sixth of the series of our consultative meetings which has proved to be extremely useful not only in stabilizing the party but also contributing immensely towards handling various challenges that have appeared before us as a nation and as a people.

“The meeting got so productive that we decided at last meeting to bring in our National Assembly leaders to joins us in the deliberations which I have said earlier have been found to be very productive and useful indeed. I thank you for coming to this first meeting since the return of our dear President for his medical leave. On your behalf, I want to formally welcome him and thank the Almighty God for the wonderful healing that has been performed because since he came back there has been no question at all”, he stated.

Though the Senate President was represented by the Senate Leader, Ahmed Lawan, his counterpart in the House of Representatives, Speaker Yakubu Dogara, was also absent but reportedly represented “by a member from Rivers state”.

Out of its 24 governors, only seven as well as four deputy governors were present. Those at the meeting included the Govs. Nasir el-Rufai (Kaduna), Mohammed Abubakar (Bauchi), Atiku Bagudu (Kebbi), Simon Lalong (Plateau), Rochas Okorocha (Imo), Godwin Obaseki (Edo) and Abdullahi Jibrilla Bindo (Adamawa) who was attending the meeting for the first time. Deputy Governors of Ondo, Kano, Kogi and Nasarawa states were also in attendance.

Okorocha’s decision has continued to attract a wave of backlash from both Nigerians and South Africans who have described the statue as meaningless.

Unable to pay pensioners, some Nigerians had queried the governor’s decision especially as it also came few days after another Nigerian, Jelili Omoyele, a 35-year-old, was killed in South Africa, adding to a long list of Nigerians to have been killed in the former apartheid enclave.

The governor has however accused the opposition People’s Democratic Party PDP of sponsoring the attacks saying the party never attracted any meaningful personality to the state when it held sway.

“If it was in the days of PDP, Schools and Markets would have been shut down and roads closed because President Zuma was coming. But none of such thing was done because Rochas and his government have a human face. The PDP for the 12 years they held sway never attracted any meaningful visitor to the State except PDP NEC members who were coming to loot the State.

“And in case these “Galatians” do not know, if all we need to do to attract good things or investments to Imo is erecting statues, then, we have no option than to erect as many of such structures as possible. We owe no one apology”, the state government had said.

Buhari Certificate: Why Court Strikes Out Suit Against Buhari’s Eligibility