NO fewer than 20 petroleum marketers that allegedly involved in creating scarcity of petroleum products have been apprehend, Chairman, Board of Trustees (BoT) of Independent Petroleum Marketers Association of Nigeria (IPMAN), Alhaji Abdulkadir Aminu, has said.

He added that over 2,000 people who claimed to be independent petroleum marketers in the country were not licensed.

These, among other things, were revealed during an interaction with the IPMAN BoT boss on short term and long term solutions to the perennial fuel scarcity in the country in Abuja, weekend.

Recall that the Federal Government had recently said that no marketer had been arrested for being behind the scarcity of petroleum products, but the IPMAN boss, while fielding question on how many of the marketers had been apprehended so far, said they were more than 20.

He said: “I can tell you that those that were affected are more than 20, to the best of my knowledge as of this time. But we keep on sensitizing them; we keep on telling them that, look, if you come out of this situation nobody look at what you are doing.

“What an ordinary Nigerian wants is just to drive to a retail outlet, buy fuel and he goes out. But as long as you become an impediment, Nigerians will also fight you.”

Aminu also said the speculation that the government was planning to increase the pump price of petroleum products was not through as government made it clear during the stakeholders meeting recently.

He said: “It was made abundantly clear during the meeting that there is no plan whatsoever to increase the pump price. The pump price remains N145 per litre.

“So for anybody who is thinking there will be an increase tomorrow and he is influencing hoarding that person should know that this is job in futility, there is no date for that.

“Secondly, what we agreed at the critical stakeholders’ meeting, those people who are hoarding these products I disclosed it to them that these are people who don’t even have licenses.

“It will surprise you to know that we have over 2,000 retail outlets in this country that are not licensed, are not known to DPR and these are the nuisance value that everybody is having.

Why We Want To Collapse 400 Govt Bank Accounts —el-Rufai 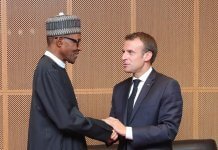