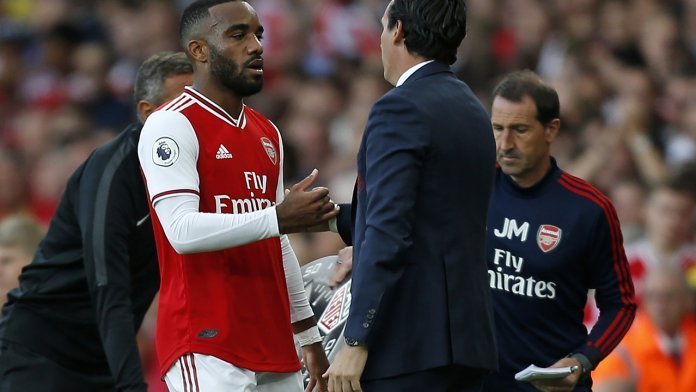 UNAI Emery saluted Arsenal’s fighting spirit after they hit back from two goals down to salvage a pulsating 2-2 draw against Tottenham in Sunday’s north London derby.

Emery’s side was in danger of a damaging defeat after goals from Christian Eriksen and Harry Kane put Tottenham in control by the 40th minute at the Emirates Stadium.

But Alexandre Lacazette reduced the deficit just before half-time and Pierre-Emerick Aubameyang grabbed Arsenal’s equaliser after the interval.

“I’m pretty proud of our work. We played with our hearts, sometimes more than our heads. We need the balance,” Emery said.

“We need to be clearer in our minds. We made some mistakes in the first half.

“The fans pushed us and helped us. The first goal for us was the key.

“We deserved to win over the 90 minutes. The match was amazing for everyone watching.”

Arsenal head into the international break in fifth place, with just one defeat from their first four matches.

Tottenham is two points behind their hated rivals and has won only once in their opening four fixtures.

Tottenham boss Mauricio Pochettino has been frustrated by the decision to allow European clubs to buy players after the Premier League transfer deadline.

His Denmark playmaker Eriksen has been keen to leave, creating an unsettling effect for the rest of the squad.

But with the European deadline looming on Monday, Pochettino hopes Tottenham will be more unified once Eriksen’s future is settled.

“In the first half it was a great 45 minutes and I was a little bit ashamed to concede before half-time,” Pochettino said.

“We have massive quality and from tomorrow we will all be on the same page. With Christian Eriksen we have to wait but it shows it was the right decision to play him.

“He showed a great performance and helped the team to get a point here.

“I am optimistic and happy to work with the squad and try to fight for big things for the club.

“It is about drawing a strong line for the future. It’s important to move on and learn from the past.”