The High Court of the Federal Capital Territory, Court 12, sitting at Bwari, Abuja has dismissed the case filed by Busola Dakolo against Pastor Biodun Fatoyinbo of the Commonwealth of Zion Assembly (COZA).

The judge preceding over the case, Justice Oathman A. Musa, held that the matter amounts to injustice and an abuse of judicial process adding that the case is empty and purely sentimental.

Justice Musa said that the case was aimed more at cruelty than obtaining justice.

The court also awarded costs of N1 million against Dakolo and held that the fine should have been 10 times more because the court’s time was wasted.

Recall that in June 2019, the wife of the popular musician, Timi Dakolo accused COZA pastor, Biodun Fatoyinbo of rape and on the 6th of September 2019. She summoned the founder of COZA to court where she sued him for intentionally inflicting and causing her continuous emotional distress.

In a reaction to the lawsuit, Fatoyinbo filed a counter-claim stating that the accusations from Busola should be dismissed because it was frivolous and statute-barred, further maintaining that the suit was grossly incompetent.

He further included Mrs Dakolo and her lawyer, had, after they filed the suit, leaked the documents to both electronic and print media organizations, with the story widely shared on the internet “to embarrass and scandalise the Defendant”.

The pastor submitted that the court should award a cost of N50m, jointly and severally against the Claimant and her Solicitor. 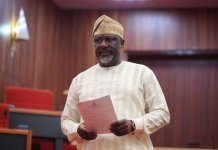