The Supreme Court, on Monday, dismissed an appeal the candidate of the Peoples Democratic Party (PDP), Abba Yusuf, filed to challenge the outcome of the last governorship election in the state and upheld the election of governor Abdullahi Ganduje of Kano State.

The apex court in a unanimous judgement by a seven-man panel of Justices that was led by the Chief Justice of Nigeria, CJN, Justice Tanko Muhammad.

Yusuf had in his appeal marked SC/1450/2019, prayed the Supreme Court to set aside the concurrent decision of both the Kano Governorship Election Petition Tribunal and the Court of Appeal, which affirmed Ganduje’s re-election.

The appellant contended that he scored the highest votes at the governorship contest that held on March 9, 2019, and satisfying section 179 (2) (a) and (b) of the 1999 Constitution, as amended.

In the notice of appeal he filed on November 30, he alleged that the Kano State Returning Officer had after results of 44 Local Government Areas were declared, cancelled results in 207 polling units in the state and declared the election as inconclusive and scheduled a re-run election for March 23, 2019.

However, in its lead judgement that was delivered by Justice Sylvester Ngwuta on Monday, the Supreme Court, said it saw no reason to dislodge the judgements of the two lower courts.

It held that facts the PDP candidate adduced before it was inconsistent with the sole ground of his appeal, adding that he failed to demonstrate that judgements of the two lower courts were perverse. 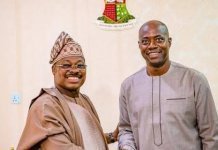