MBGOS: A Beauty Contest of Shame, Robbery And Mockery Of African Queens

Robbery, cheating and mockery are the best descriptions that suit the recently concluded Most Beautiful Girl in Oyo State. The beauty pageantry started with a need to engage in corporate-begging by pleading for online votes that attract a token of a fee. The real value of the token needs to be evaluated by those in the banking and telecommunication industries; if truly token is token in this sense.

For the respect of the real value of this token involved by the organizers as regards the online voting; they made it a fair game. Those with the highest numbers of votes make it to the list of top ten. Beauty, brain and behaviour that ought to be the core values of the pageantry are not the topmost priorities of Most Beautiful Girl in Oyo State but Money is.

#ByeByeTrump: Biden To Be Sworn In As Trump Leaves White House

How on earth are we to have a fair game in a contest of many where the money takes the centre place? If money is the main deal, why can’t we just sell out the crown(s) once and for all? This is what many models know very well and they decided to keep off from pageantry of any kind, especially from the kind of organizers like that of Most Beautiful Girl in Oyo State.

ALSO READ:  US Election 2020: Biden, Trump In Tug-Of-War Over Midwestern US 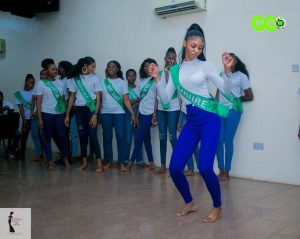 Here comes to the second stage of robbery, there’s what is now newly introduced known as camping with features like prejudging night. This is not free but not expensive, it is just an official token of N15,000.

That amount comes from how many ladies? The proper calculation is an exhibition of shame on the part of those lobbying for the crowns while this year’s version reflects mockery of our ladies as they are handed tickets to the event to be sold. The VIP costs the sum of N10,000 while the regular tickets N2,000. For the camping, each lady or beauty queen was given two VIP tickets for N10,000 just to make sure the camping can sum up to the sum of N25,000 each in place of the budgeted N15,000. In a world where beggars bargain nothing must be involved; this must be the why the prejudging night activities resulted to what the organizers refered to as “cancelled” and I call it “mockery of shameful robbery”.

For the event, each contestant must sell tickets to the general public at an average of three VIPs and 10 regulars, the higher you sell the higher your chances of winning. The more people to shout, the more pressure on the judges; that’s a secret the organizer has to tell them individually. Then, our Queens begin to bargain with old-timers at least we are still friends while no matter what the new timers say without dropping his salary doesn’t make sense. The question is who is the tool here? I never meant tool as the objectification of the female gender, I intend saying “fool”.

For our society to be sane I think that we only need one sane person in power. When I become the Seyi Makinde of my time, I will create measures to monitor all sectors in the state, including public, private and “pub-private” as the case of Most Beautiful Girl in Oyo State. I can feel the pain of my bestie; an African Queen who struggled hard as a dancer went into fashion because of her adventure in modelling got herself trapped in the shameful robbery of the organizers of Most Beautiful Girl in Oyo State.

Used all her influence to be the highest online because she got fans, I think I am number one of them all. She never made it to the top ten. The list came with a name and face never heard or seen. Is this Oyo State of Seyi Makinde?

Nothing on earth clould ever had calm her down!

Our 7,500 votes of N50 each has turned to a waste! Is it not the highest online? Apart from the fact that she mandated us to buy tickets, with shouting and screaming, at least we came home with Miss Charismatic MBGOS. This is a pure reflection that the award isn’t about her but us.

For the camping where the behaviour of all queens is to be evaluated. Miss Grace decided to engage in serious fasting at the camp; she got sick without proper medical attention. However, we appreciate the paracetamol given to her six hours later. Every second at the camp we paid for became a waste because it wasn’t used as a measure. Behaviour, as an important characteristic of a queen, becomes less important to the organizers!

When she was to be crowned, power holding held the light we could not even witness the crowning of our tirelessly hardworking queen. To the best of our knowledge, it was a deliberate action from the side of the organizer.

When I asked the master planner behind everything why our contestant never made the list of the top 10 since we had the highest online votes. **Note*: Top 10 is a printed list to be handed over to the judges the organizers choose not independent judges as expected since the general public is the source of income involved in the success. Since this is not a sane society, we agreed.

The organizer simply owned us an explanation which he simply did on the request to send me videos which he did. He sent two videos to justify that my friends are dull, stupid and foolish. Unknowingly to him that an injury to my friend is an injury to me. When I asked what the videos he sent implied he replied, “The judges made their judgement on this, if this is not clear to you on her intelligence, then we have nothing else to say to you”. A video of the event!

I kindly replied with two other videos; one discrediting the credibility of the winner (she too made mistake as my friend did) while the other video shows injustice to my dear friend when she was about to be crowned. He never replied and I have a series of questions unable to ask to make peace to reign.

His next line of actions were the two videos of my friend where she made mistakes on social media with the caption in capitals “HIGHLIGHTS OF THE FINALE… WHO NAILED IT?”.

The organizers of Most Beautiful Girl in Oyo State should kindly note that they can’t rob and cheat us and still have the effrontery to make a mockery of us.

I am Oyeniyi Esan once again. I demand an apology to my friend at a speed of 24 hours ultimatum. Do you think, the organisers should apologise?

‘I Am Very Disappointed In The United States Supreme Court,’ Donald Trump Laments

President Joe Biden kicked off his term by signing out a series of immigration executive actions, moving swiftly to undo...

US President Joe Biden has begun to undo some of Donald Trump's key policies, hours after being sworn in. In...

A former Vice President of Nigeria, Alhaji Atiku Abubakar has sent a Message of Goodwill To President Joe Biden and...

#ByeByeTrump: Biden To Be Sworn In As Trump Leaves White House