THE Director General of the Nigerian Tourism Development Corporation (NTDC), Mrs. Sally Mbanefo, has thrown her weight on the promotion of the Nzeh Mada cultural festival.

The NTDC boss while disclosing her intention to promote Nzeh Mada cultural festival during the third edition of the festival recently, in Akwanga, Nasarawa State, said “Nzeh Mada festival, when fully developed, would not only be of economic value to the country, but also engage the teeming unemployed youth.” 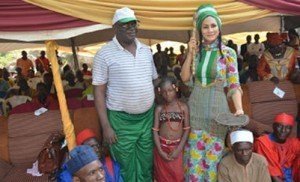 According to Mrs Mbanefo, who was the chairman of the occasion, the onus of developing tourist sites doesn’t solely rely on the government, adding that NTDC as a government agency would do everything within its powers to promote Nzeh Mada festival. She therefore urged tourists to visit local sites.

“Mada culture is rich, the location is safe and serene, and the people are very hospitable. As you know, most of the tourist sites are not all in the cities, I therefore encourage tourists to explore the local sites and communities, which is embodied in Mada hill, its waterfall, serene climate and the hospitability of the people.”

In his reaction, the Chun Mada, HRH Samson Gamu Yare, thanked the NTDC boss for volunteering to promote the Nzeh mada festival. He therefore honoured her with a symbolic axe and wooden flatter as a sign of recognition of her support for the Nzeh Mada festival.

The Mada chief also noted that NTDC’s partnership would surely go a long way in repositioning the festival to international standard.

He said: “We have a very rich cultural heritage. We are endowed with the Cave, the stagnant water at the top of the Numan hill, the sounding rock and Nni-ngahaan tourism centre. With the professional touch in terms of packaging and organisation and right partnership from different stakeholders like NTDC, I believe we will go beyond our contemporaries.

“Also, I can see unity in diversity that is why I want to see Mada people putting heads together. We should not allow primordial sentiments keep us apart,” the chief yearned.

Also speaking, the Executive Secretary/CEO of National Institute for Cultural Orientation (NICO), Prof. Barclays F. Ayakoroma, noted the importance of cultural festivals in the area of creation of employment, and promotion of indigenous culture especially now that the sector is beginning to be a viable alternative to oil when properly exploited.

He said: “We always identify with people who promote their culture and festivals that is why since 2014 we have identified with Nzeh Mada festival, because we believe that that is one of the platforms for the unification of the people, promotion of the culture of the people and a means for gainful or meaningful employment.”

Ayakoroma therefore pledged his support to make sure that Nzeh Mada festival becomes one of the best in the country. 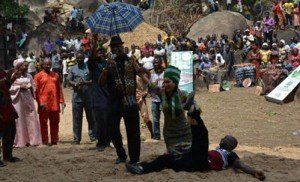 “Mada culture is unique, their costumes, dances and even the venue for the festival itself – foot of the Mada hill – is also astonishing. You can as well see how the people are really very enthusiastic about the festival because it is their own festival of their culture. So it is our hope that we will do the best we can to ensure that NICO and Mada community partner in every way possible,” he said.

Earlier, the Festival Director of the festival, Prof. Emmanuel Dandaura, pointed out that Nzah Mada festival, which was redesigned in 2014, is aimed at promoting the culture of Mada people as well as tourist attraction.

“The annual Nzeh mada festival was redesigned as a trado-modern tourism event, which now holds every Easter season in Akwanga metropolis. That is why this year we intend to go into major discussion with NTDC, NICO and other stakeholders that is hoped to culminate into signing an MoU for partnership.

“We have also invited the private sector to witness the festival so as to come up with the business ideas that will move the festival forward, Dandaura noted.

British Airways Resumes Flights From London After IT Outage