THE Federal Government and the Nigeria Labour Congress have set up a 16-man committee to work out palliative measures and fashion out a new minimum wage that will cushion the effects of the increase in the pump price of petrol.

The NLC had announced the suspension of its strike to demand for reversal of pump price per litre from N145 to N86.50 with a resolve to enter into negotiation with the Federal Government on the review of minimum wage for workers, electricity tariff and the constitution of the Board of the Petroleum Products Pricing Regulatory Agency.

The Federal Government on Wednesday met some of the demands of the NLC by announcing the appointment of Alhaji Mohammed Buba as the Chairman of the board of the PPPRA and agreed in conjunction with labour to set up the minimum wage committee.

The Secretary to the Government of the Federation, Babachir David Lawal, who made the announcement after the meeting held in his office with the Ayuba Wabba faction of the NLC, said President Muhammadu Buhari had approved the appointment and the setting up of the committee.

The board of the PPPRA which has the statutory role of determining and fixing the prices of petroleum products has not been constituted for over four years.

The SGF said that the 16-man committee would look into the various issues that emanated from the hike in the price of petrol such as the minimum wage, implementation of the N500bn palliative in the 2016 budget as well as the review of the pump price.

Lawal said, “…This (Wednesday) evening, I’m proud to announce that, first of all, a 16-man committee has been set up as a technical committee. It’s half from the labour side and half from the government side to discuss issues concerning the minimum wage…

“The minimum wage involves almost every segment of the society, so it’s not just the Federal Government and workers alone, but all stakeholders, the local governments, the private sector. So, this technical committee will discuss the modalities on how this issue would be brought forward.

“Secondly, we have agreed that the 16-man committee will look at the issues of implementation and allocation of resources of that palliative, the half a trillion naira palliative. The committee is supposed to work and bring its report to the committee of the whole within two weeks of its inauguration.”

Also speaking, the Minister of Labour and Employment, Dr. Chris Ngige, stressed that the review of the minimum wage was a tripartite negotiation arrangement.

He explained that the 16-man committee was expected to work out the framework to constitute the tripartite committee for the minimum wage review.

God’ll Never Forgive Me If I support Atiku’s Presidential Ambition –... 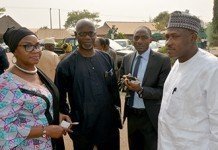