A Federal High Court in Abuja has rejected an ex-parte motion for injunction restraining the Inspector General of Police and the Attorney General of the Federation from going ahead with the prosecution of the Senate President, Bukola Saraki and three others on charges of forgery of the Senate Standing Orders 2011.

The applicant for the injunction, who is a serving senator, Gilbert Nnaji, had urged the court to stop the defendants from acting on the police report issued with respect to the case.

But it was learnt late on Saturday that Justice Gabriel Kolawole rejected the motion last Monday.

The judge ruled, “In terms of the restraining orders, which the plaintiff seeks in the prayer one of his motion ex-parte, I am unable to grant the prayers because the plaintiff has not been able to overcome the issue of his locus standing, which I had raised at the proceedings of 27 July, 2015.

“It is not sufficient, when the Supreme Court’s decision in Senator Abaraham Adesanya v. President of Nigeria & another (1981) 5 SC 112 is applied, for the plaintiff, who has not shown that he is one of the defendants listed in the criminal charge attached as Exhibit B to this motion ex-parte, to be conferred, in the context of the provision of Section 6(6)(b) of the Constitution 999 (as amended) with the cloak of an ‘aggrieved’ person who ought to be granted access to ventilate his grievance and to seek the interim orders in his motion ex-parte.”

The Federal Government had on June 10, 2016 preferred two counts of criminal conspiracy and forgery of the Standing Rules of the Senate used for the leadership election of the presiding officers of the Senate in June last year against Saraki; the Deputy Senate President, Ike Ekweremadu; and two others.

The two other co-accused are a former Clerk to the National Assembly, Salisu Maikasu, and his deputy, Benedict Efeturi.

Justice Kolawole however described as “an abuse of court process” the decision of the AGF to file the forgery charges during the pendency of a suit filed by the plaintiff challenging the competence of the police report.

The judge, while querying the motive of the AGF, Abubaka Malami (SAN), who he noted had participated in the Nnaji case before his appointment as the AGF, wondered why Malami was in a “desperate haste” to proceed with the charge “when he was aware of the pendency of a suit challenging the report on which the charge was based.”

The judge said, having found that the filing of the charge amounted to an abuse of court process, he would have proceeded to dismiss it, but for the charge pending before the High Court of the Federal Capital Territory, with a coordinate jurisdiction with his court.

Nnaji had filed the substantive suit on July 23, 2015 upon learning that the police was about to publish its investigation report on the forgery reported to it through a petition by Senator Suleiman Othman Hunkuyi of the Unity Forum.

On July 27, 2015, the judge refused the plaintiff ex-parte prayer for an order directing parties to maintain status quo pending the determination of the substantive suit, and instead, directed the 1st defendant — IGP — (because a substantive AGF had yet to be appointed) — to show cause as to why such order should not be granted and adjourned to August 4, 2015.

On the next date, the IGP and the Solicitor General of the Federation, Taiwo Abidogun (who represented the AGF), did not show cause as ordered by the court, but filed a notice of objection challenging the jurisdiction of the court to hear the suit.

Hunkuyi, represented by a team of lawyers including Mamman Osuman (SAN), Dele Adesina (SAN) and Abubakar Malami (SAN), applied to be joined as party to the suit. Hunkuyi’s motion was later struck out when his lawyers did not attend court to move it.

While the substantive case by Nnaji and the notices of objection by IGP and AGF were pending, Malami was appointed the substantive AGF, shortly after which Justice Kolawole fixed hearing of the suit and all pending objections for July 6, 2016.

To stop the arraignment of Saraki, Ekweremadu and two others named in the charge, Nnaji went back before Justice Kolawole with the ex-parte motion for restraining orders against the IGP and AGF.

The motion was heard on June 27 by Justice Kolawole, who fixed June 28 for ruling. Saraki and others were also arraigned before the High Court of the FCT on the charge filed by the AGF June 27.

In his ruling on June 28, Justice Kolawole faulted the decision of the AGF to proceed to file a charge based on the police report when the suit challenging the report was still pending.

He held that although, as the AGF, he had the constitutional powers to institute and discontinue criminal proceedings on behalf of the Federal Government, he must exercise such powers in public interest.

Justice Kolawole noted that, although the charge was filed by a lawyer in the Federal Ministry of Justice, the official acted as an agent of the AGF, who was listed as one of the leading senior lawyers that filed an application for joinder on behalf of Hunkuyi, who until his (Malami’s) appointment, was his client.

He, however, refused the applicant’s request to quash the police report on the grounds that the report was not attached to the motion and that it was not placed before the court.

Justice Kolawole also refused to void the charge before the FCT High Court on the grounds that the charge was before another court of equal jurisdiction.

Meanwhile, the crisis in the leadership of the Upper Chamber of the National Assembly has taken a turn for the worst as a cold war has started between Saraki and his deputy on one hand, and the Leader of the Senate, Ali Ndume, on the other hand.

Investigations by our correspondent, in the last one week, revealed that trouble started when Saraki allegedly discovered that Ndume was not on the same page with him on the crisis he was having with the Presidency.

A ranking senator, who craved anonymity because of the sensitive nature of the issue, confided in one of our correspondents during the week that Saraki suddenly discovered that Ndume, who was allegedly close to the Presidency, was no longer pleading his case whenever he was in the Villa.

The senator explained that since his emergence as senate leader, Ndume allegedly warned Saraki to be wary of Ekweremadu and other members of the Peoples Democratic Party in the red chamber who might want to pitch him against the presidency.

He was said to have specifically advised Saraki to avoid any form of confrontation with President Muhammadu Buhari, but should rather do everything possible to support his administration, so that the latter would extend a hand of fellowship to him.

The source said, “The trouble between Saraki and Ndume started when some of Saraki’s ‘men’ in the Villa started feeding the Senate President with reports of how Ndume had allegedly joined members of the Senate Unity Forum to work against him and Ekweremadu.

“It was when Saraki discovered that all attempts by him to see President Buhari did not succeed despite Ndume’s assurances that he started listening to other close colleagues, who advised him to adopt a confrontational strategy against the Presidency.”

Attempts to speak with the Senate President on the issue failed as he is currently on Lesser Hajj in Saudi Arabia, while calls put across to his deputy did not also connect.

However, when contacted, the Senate Leader denied knowledge of any face-off between him and the presiding officers of the senate.

Ndume said, “I am not aware of any crack in the Senate leadership. In fact, I am hearing that for the first time.”

But some of Saraki and Ekweremadu’s aides, who spoke with one of our correspondent off the record in separate interviews, confirmed that Ndume was no longer on the same page with the Senate presiding officers.

An aide to Saraki said, “It is true. Ndume is no longer on our side but there is no cause for alarm. We have taken necessary measures. We have been observing him for quite some time now but he has shown to us where he belongs.”

Likewise, an aide to Ekweremadu, who equally spoke on condition of anonymity, acknowledged the crack in the Senate leadership, stressing that Ndume had finally fallen apart with Saraki and his boss.

He said, “The truth of the matter is that the crisis did not start today. It was when the Senate President realised that he was being misled by the senate leader that they fell apart.” 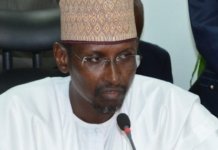 Use Your Skills For Nation Building, FCT Minister Charges Youth 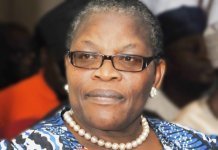