SENATE President, Abubakar Bukola Saraki, on Wednesday appealed to elders and leaders of the North-East region to make the North-East Development Commission (NEDC) work and beneficial to the generality of the people when the recently passed bill is signed into law by the President.

Saraki, according to a statement by his Chief Press Secretary, Sanni Onogu, in Abuja, made the appeal when the Governor of Borno State, Kashim Shettima, led a delegation of elders and leaders of the six states of North-East region on a thank you visit to the leadership of both chambers of the National Assembly over the passage of the NEDC Bill.

Saraki said he was happy with the progress made so far in restoring peace in the region, rehabilitating the people and rebuilding the areas devastated by the Boko Haram insurgency.

Why saying that the thank you the National Assembly expects is for the proposed intervention agency to make positive impact on the people for which it is meant, he expressed hope that Maiduguri as well as other major urban centers in the North-east will in no time regain their commercial vibrancy for which they were once reputed.

ALSO READ:  Re: Change Must Begin With Buhari
Advertisement

Saraki said: “We all knew the situation in the Northeast. I am very happy with the progress we have made today as we play our own part to show that the National Assembly is truly behind the North-east in the restoration of peace, rebuilding the devastated areas and bringing life back to the region.

“A lot of us have personal experiences. I remember when I was in the private sector, commercial activities in those days in the north, after Kano, the second place you go to is Maiduguri. It is my hope and wish that that day will come back when commercial activities will again dominate Maiduguri and it is my hope and prayer that what has now befallen the region will never happen again.

“Since January 13, we have transmitted the NEDC Bill to the President and I have no doubt that he will assent to it looking at the public demand for it. If everything is done, I think the thank you, you can give all of us is that after the Bill becomes law, and the commission starts to work, that it will make a difference in the lives of the suffering masses;

“And that we will not come to this National Assembly and begin to set up a panel of investigation over what is happening in the commission. I say this with all seriousness. I don’t want to hear later or for people to ask us why did you set up this commission?

“And I want to plead with our leaders and elders here, the youths, our women and those who are watching that we make a pledge and commitment to ourselves that the journey and the sacrifices that everybody has made to make this Commission come into existence, that we the leaders from Northeast, not just those who will be appointed to the Commission, all of us have a responsibility to make sure the resources bring the best to our people in the Northeast.

“This I think will be the biggest thank you you can give all of us and I pray that the Almighty Allah will allow you at this time be a good example for us and it would be the thank you that you give to all of us that are here,” Saraki said.

Speaker of the House of Representatives, Hon. Yakubu Dogara said the thank you visit has become necessary in view of the greater role the National Assembly would be expected to play in appropriating funds to the commission after it becomes operational.

Governor of Borno State and Leader of the Delegation, Kashim Shettima, noted that the North-east has suffered and therefore needs urgent attention, while thanking the leadership of the 8th National Assembly and all Nigerians for the supreme compassion extended to the Northeast so far.

While noting that the the cost of devastation in the Northeast is about $9,6billion, he said that the NEDC when established would guide its operation with the experiences of the Niger Delta Development Commission (NDDC). 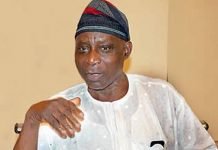