THE Senate, on THursday, said the information that federal judges were being owed four-month salary arrears was not true and should be jettisoned.
Presenting the report of Committees on Finance and Judiciary, Chairman, Senate Committee on Judiciary,  Human Rights and Legal Matters, Mr David Umaru, told the Senate that salaries of judges had been paid up-to-date.
It will be recalled that the Senate had last week asked its committees to probe the alleged non-payment of judges for four months, following a point of order moved by Deputy Senate Leader, Bala Na’Allah.
Presenting the findings of the Joint Committees on Finance, Judiciary, Human Rights and Legal Matters, Senators confirmed that the December salaries of the judges were paid on January 17, 2017, just as he said the committee met with the National Judicial Council, NJC, and Ministry of Finance to arrive at the findings.
His words: “We found as a matter of fact that the judges had actually not been paid for the month of December. And that the judges were not owed in arrears for the remaining months. We have confirmed that the December payment was actually effected on January 17.”
ALSO READ:  I Would Have Burnt My Membership Card, PDP Flag If Sheriff Had Won --Fayose
Advertisement
Loading... 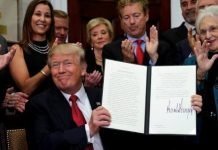