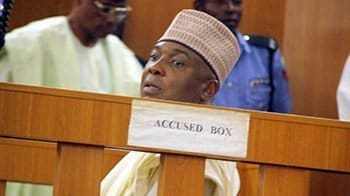 SENATE President Bukola Saraki has denied ever  importing any bullet proof car contrary to the report laid before the Senate.

Saraki made the denial when he appeared before the Senate Committee on Ethics, Privileges and Public Petitions in Abuja on Monday.

He said he had nothing to do with the vehicle under reference, adding that the allegation was an attempt to malign his person.

“I am not (an) importer and at no point did I import an SUV Range Rover. As you know, this is a vehicle that is not a personal vehicle.

“It is a vehicle which was processed through the National Assembly.

“I don’t know anything about the importation; I did not appoint any clearing agent or anything like that.

“Most of the vehicles that are here you only know when it is delivered to you. None of this did I import or getting any agent or going to the port.

“This is because we all know that all treated vehicles have end user certificate and there it states clearly who the importer  is  and these documents are available and there is no document anywhere that shows my name.

“So, I want to state categorically that this is not true and it is important that I come here and clear my name and put this matter to rest.

“We all raised the issue of the policy that is anti-people in the interest of Nigerians.

“This policy that really had no value at all  and that was why this motion came up and we debated it in the interest of Nigerians.

“Unfortunately those who want to fight back went and thought there was something to blackmail us with.

“I know the documents you have will show clearly that it has nothing to do with me’’, he said.

The Senate President commended the committee for giving him a fair hearing. He said the process would further strengthen the institution as well as protect the country’s democracy.

“I believe that this process is good for us. It will further strengthen our institution.

“It is a great day for our democracy for me to come before you as the President of the Senate.

“To ridicule an institution of this magnitude is not something we should take lightly and that is why I have taken the time to be here.

“Today, it is me but tomorrow it will be another person.

“I think it is part of the sacrifice we are making in the work that we are doing that we have this kind of case that did not hold water.

“We must protect this institution because this is the only thing we can leave. The difference between military rule and democracy is the parliament.

“For as long as the parliament is weak, our democracy can never be strong’’, he said.

Saraki reiterated that democracy could only be strong with a strong parliament.

He added that the parliament would only be strong if the lawmakers respected the Standing Order and the Constitution.

The Senate President noted that it was his belief in the institution of the National Assembly and the legislature as a whole that motivated him to appear before the committee.

He pointed out that “that is why I told myself that I must come here no matter how ridiculous I felt it was “because the documents  are clear.

“There is no where it said I imported it; it is not my private vehicle. The importer of the car, Tokunbo Akindele,  said it was imported on behalf of Oando Plc in 2015. He denied allegations that Saraki had any link with the car.

According to him, the car was imported by the company for the various operations it had around the country.

He also explained that “at no point did we submit any fake document for the clearing of the car.

“We followed all due processes in terms of payment to the company which handled the entire process for us.

“In 2015, on behalf of the firm that I work for, Oando PLC, we imported a Range Rover Bullet Proof SUV vehicle.

“We imported it as the company that needed to use it for the various operations  that we have around the country.

“The car took longer than was expected and by the time it reached Nigeria in 2015, September, we decided that we will no longer be using the car, so we effectively parked it.

“We  mandated a company offshore to buy the car, amour the car, ship the car, clear the car with Customs and just deliver the car to us as a full-fledged service.

“We received the car in September 2015 assuming that all of these things were done.

“All payments were made for the acquisition, the armouring, the shipping as well as the clearing of which we have necessary evidence.’’

He further explained that at no point did the company receive any documentation from the National Assembly in the process of clearing the car.

“We were not a part of clearing the car, we were the customer; we were expected to receive the car for our own use.

“The vehicle was not to be used by Sen. Bukola Saraki, it was not imported or acquired for his use at the time the vehicle came into the country.

“The National Assembly took receipt of the car through a consignment from us, through Lanre Shittu Motors in December 2015.”

He said the car was in the country for two months and with no use, adding that it was at that point that Oando released it to Lanre Shittu on consignment who sold it to the National Assembly.

Chairman of the committee, Sen. Sam Anyanwu,  gave  assurance  that the committee will  do all within its powers to ensure that all parties involved got fair hearing.

While commending the president of the senate for appearing before the committee, Anyanwu said the committee would continue to work for the advancement of democracy and protection of the parliament.

He said the customs boss, “will appear before it on Tuesday to speak on behalf of the Nigeria Customs Service.’’