THE White House communications director has resigned only three months after being hired by President Donald Trump.

As part of the shake-up, White House press secretary Sean Spicer will reportedly hold on to his position, but there will be fewer media briefings.

The reshuffle follows reports of disarray in the White House communications team.

Mr Dubke is leaving on good terms, according to Axios News, a politics website which first reported his exit.

White House adviser Kellyanne Conway said Mr Dubke had agreed to stay on until Mr Trump returned from his overseas trip to the Middle East and Europe on Saturday.

“He has expressed his desire to leave the White House and made very clear that he would see through the president’s international trip,” she told Fox News.

President Trump is reported to have been frustrated with White House messaging.

He recently raised the idea of scrapping the daily news briefing altogether and holding one himself every fortnight.

He did not work for the Trump campaign and was not seen as a Trump loyalist.

The White House has not named a successor for Mr Dubke.

Mr Lewandowski was forced out in June last year amid reports of a power struggle with Jared Kushner, Mr Trump’s son-in-law and a senior White House adviser.

However, Mr Kushner is now reportedly under scrutiny as part of the FBI’s investigation into whether members of the Trump campaign colluded with an alleged Kremlin plot to help Mr Trump win the presidency.

There are reports that Mr Lewandowski could rejoin the administration soon as part of White House efforts to fight the narrative that Mr Trump is too close to Russia. 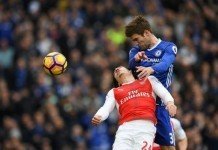