SENATOR Shehu Sani, on Tuesday, condemned a plan by the Nigerian Military and the Police to monitor the opinions and comments made by Nigerians in a bid to check the rising incidents of hate speech in the country.

San, who stated this when he paid a courtesy visit on the National Human Rights Commission (NHRC) said, it is clear that people in position of power are still finding it difficult to realise that Nigeria is a democracy which allows right to freedom of expression.

The Senator representing Kaduna Central Senatorial district in the Senate also described as undemocratic the gagging and arrest of journalists for posting information on what is happening in the states on the social media platforms.

The lawmaker who however did not support the idea of churning out hate speech in the country maintained that “the Military or the Police have no business in monitoring and arresting people for posting information on the social media.”

The human rights activist who was severally jailed during the Military for his astute defense of human rights stated that there is need more than ever before to have a template on what constitutes a hate speech in order for the security agencies and Nigerians to take note.

On the challenges facing the Commission, the parliamentarian promised to assist the Commission towards realizing its mandate saying, “We do receive reports that you are overwhelmed by complaints.

“You are doing a fantastic job, for standing up for corporate and government interest, as a human rights activist and now a Senator, I will offer myself to do everything to see that your budgetary requirements are fully met,” the senator added.

In her response, the Acting Executive Secretary of the Commission, Mrs Oti Ovrawah expressed appreciation that Senator Sani has stepped in to assist in taking the Commission to greater heights as far as promoting; protecting and enforcing the rights of Nigerians are concerned. 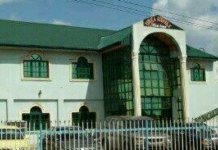