SENATOR representing Oyo North Senatorial District at the Upper Chamber of the National Assembly, Dr. AdbulFatai Buhari, said the commendation and encomiums showered on him by the Governor of Oyo State, Senator Abiola Ajimobi; Chairman All Progressives Congress (APC); party leaders and constituents in Senatorial Districts, and the state at large, will further boost his passion to deliver more dividends of democracy.

The Senator while speaking with journalists in Ibadan on the Second Edition of AbdulFatai Buhari Economic Empowerment Programm held at NYSC Camp, Iseyin thanked the Governor and his cabinet members, part leaders and members, people of Oyo North and the state for their supports and prayers.

Recall that the Executive Governor of Oyo State Senator Abiola Ajimobi, Party leaders traditional rulers and members of the public lauded the lawmaker for effective representation and passion for the development of Oke Ogun area and Oyo State at large.

Some of the beneficiaries in their remarks also vowed to support him in his bid to succeed Senator Ajimobi as the next governor of Oyo State.

The lawmaker said the empowerment program which was described as unprecedented and best in the history of Oyo State by Governor Ajimobi, party leaders and members of the public is one of the ways through which he appreciates his constituents and loyalists for reposing confidence in him through their votes and prayers after the election.

The former commissioner for local government and Chieftaincy Matters also disclosed that efforts on the Bill for the Establishment of Federal University of Agricultural Technology in Oke Ogun, Federal Polytechnic Ogbomoso, and other infrastructure projects in the region are ongoing and would be achieved before the expiration of the present administration.

ALSO READ:  PDP To Buhari: Nigeria Better Place To Live Under Us

“I am also working on the reconstruction of Oyo-Iseyin road, development of Ikere Gorge Dam so that its full potentials would be useful for our people, and many other projects. The Ogbomoso-Oyo road is a project, which all the Federal Lawmakers from Oyo State are pursuing with passion.”

The former House of Representatives Member listed payment of WAEC fee of over 600 secondary school students, donation of bus to Federation of Oyo State Student Union, disbursement of bursary to students in tertiary institutions, financial supports for widows, training of over 3,000 youths on entrepreneurship and Agriculture, free medical check up and treatment, and many others, as some of his achievements since he was elected.

Senator Buhari at the second edition of the empowerment program distributed 36 cars 250 motorcycle, 420 grinding machines 40 generators, 40 deep freezers, over 300 sewing machines and other items for selected members of the constituents.

He however urged Nigerians to keep faith with President Mohammadu Buhari-led administration in his bid to change Nigeria for the better, thereby propelling positive development and advancement. 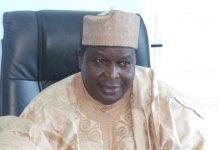