CROWDS lined the route Saturday as the final journey of the Rev. Billy Graham, who died Wednesday at age 99, got underway in his native North Carolina.

Graham’s casket was taken about 130 miles — from a funeral home in Asheville to the Billy Graham Library in Charlotte. Later this week his body will lie in honor in the U.S. Capitol Rotunda in Washington before a return to Charlotte for a funeral and burial Friday.

President Donald Trump is scheduled to be among the 2,300 people expected for the final rites of the man who was known as “America’s Pastor.”

On Saturday a 10-car motorcade accompanied by a police escort passed thousands of admirers — many of whom held signs with messages such as “Thank You.” Others snapped cellphone photos, or waved American and Christian flags, the Charlotte Observer reported.

“He was a powerful speaker who made you pay attention,” one spectator watching the motorcade said.

“I grew up going on field trips to his library,” said Kristin Whittaker, 24, a production worker for NASCAR. She said Graham’s sermons were influential on the older members of her family.

Graham’s son, Franklin, tweeted from the route, “The outpouring of love we are seeing as we travel from Asheville to Charlotte via the motorcade with my father @BillyGraham is overwhelming. People lining the streets, the overpass—Thank you.” 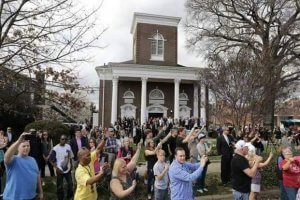 Lindsay Higgins, 33, a neighbor who lived near Graham in Montreat, N.C., said, “It’s very sad. You can definitely feel it in Montreat. Just knowing he’s not here – there aren’t enough people like him in the world, so it’s really sad.”

The motorcade’s arrival at the Billy Graham Library was greeted by the late reverend’s family. The casket was carried into the library for a private service.

Saturday’s procession initiated a week of mourning for Graham. Ceremonies this week will highlight Graham’s life and achievements.

Former President George W. Bush said he plans to visit the Graham library Monday to pay respects. Bush has credited Graham for helping him give up alcohol and changing his life. He penned an op-ed in the Wall Street Journal after Graham’s death.

On Wednesday and Thursday, when the reverend’s body reaches the Capitol Rotunda, Graham will join a very exclusive list of Americans so honored, according to the Associated Press.

Graham visited the Capitol many times during his career, saying prayers during inaugurations and offering solace in times of crisis.

Finally, a funeral and burial service will be held beginning at noon Friday on the library grounds in Charlotte.

The service will be take place under a massive tent as a simulation of Graham’s famous 1949 crusade in Los Angeles that first put him on the map. The event drew 350,000 people and was widely covered by the media.