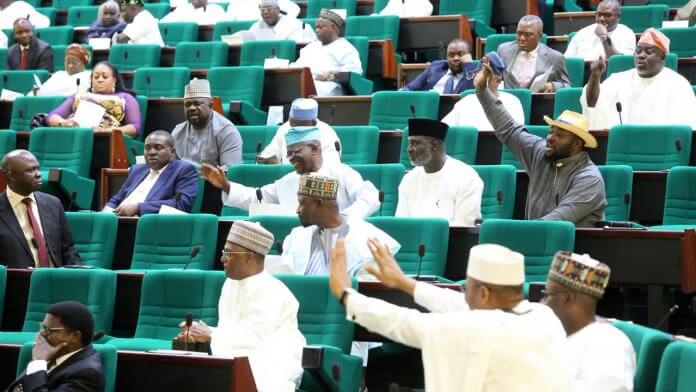 THE House of Representatives Wednesday declared the killer herdsmen as terrorists.

The also summoned President Muhammadu Buhari over incessant killings and nationwide insecurity, while passing a vote of no confidence in the service chiefs and the security advisers to the president, calling for new ones with fresh ideas.

Adopting a motion of urgent national importance moved by Terseer Gbillah (Benue State), the House also resolved to suspend sitting for three legislative days to protest against the recurring killings and

Moving the motion, Gbillah expressed worry that Benue State had remained under attack by armed men despite the deployment of security officials to check incessant killings.

“These attacks assumed a new dimension on Tuesday when two Catholic priests, the church catechist and 16 other worshippers were murdered in cold blood at St. Ignatius Catholic mission, in Gwer East Local Government Area.“Several others who attended an early morning funeral near the church are still unaccounted for after reportedly being gunned down by the retreating armed herdsmen.

“The state government had raised the alarm severally to the security agencies, but it is very worrying that they did not take pro-active measures to forestall the attacks.“Let the president provide the House with details of those responsible for the attack in Naka town and the actions to be taken against them.’’He accused the security agencies of usually responding after scores of innocent citizens had lost their lives and property.

Dickson Takhir (Benue) alleged that the killers might have connived with security agencies to perpetrate the act.“It appears there is no moral will to tackle the matter because continuous complaints about the killings seem to fall on deaf ears. The provision of the law allows self-defence and if necessary, our people will do the needful,’’ Takhir said.

Edward Pwajok (Plateau-APC) urged the leadership of the National Assembly to sit with President Buhari to explain the feelings of Nigerians over the killings.“Something drastic has to be done, we don’t only have to be talking always without commensurate results; there is the need to invite the service chiefs to brief the House on efforts to stop the killing,’’ Pwajok said.

Onyemaechi Joan Mrakpor lamented that men, pregnant women and children were being killed everyday and all that mattered to the Nigeria Police was how to arrest Senator Dino Melaye.“How did we get here and how do we get to 2019 if this situation continues? Can we all come to say we want to run when the people that we are representing are being killed daily? The DSS, IG, Army and even the commander-in-chief do not seem to know anything about those responsible for the killing,” she lamented

Aliyu Magaji said the drastic action needed to be taken was to relieve the service chiefs and the inspector general of police of their duties. “The situation has gone beyond sentiments, it is a very terrible thing happening.’’ Nicholas Ossai (Delta-PDP) said if the Federal Government failed to proscribe the killer herdsmen’s group, “then we can sit and do it legislatively.’’

The Chairman, House Committee on Media and Publicity, Abdulrazak Namdas, said the resolution to invite the president was borne out of the belief that some security agencies were not carrying out his instructions appropriately. As the lawmakers expressed anger over the massacre, it was learnt that the killings in Benue continued yesterday as suspected Fulani herdsmen attacked two areas in Guma and Gwer West local councils, killing many residents.

The militias, in the early hours of yesterday, allegedly invaded Tse Ali-Agudu Mbanyiar and Tse-Mbakpaase in Mbawa/Saghev wards in Guma Local Government Area as well as Sengev ward of Gwer West local Government.

The Guardian learnt that residents of the affected communities, including women and children, had fled their homes with luggage on their heads. A source from the area who spoke with The Guardian on phone on condition of anonymity said the killers burnt down all their houses stalled with food items, adding that the locals had recovered about 21 bodies in Tse-Ali Agudu Mbanyiar and 13 in Tomanyiin-Mbakpaase in Saghev.

But the chairman of Guma Local Government, Mr. Anthony Shawon, who confirmed the incident on phone, said they had recovered 21 bodies. “I came to Makurdi now just to arrange for doctors that will go with me to the place we kept the injured victims to ascertain their state of health.“As l speak with you, I am also on my way to Daudu with a team of doctors who will treat the victims and administer medications to the displaced persons. It is when I am done with this that l can properly brief you pressmen. Thanks,” he said.

The Chairman of Gwer-West Local Government, Francis Ayaga, while confirming the attack on his people, said he could not ascertain the number of people killed at that time as he was still gathering information.When contacted for confirmation, the Benue State Commissioner of Police, Fatai Owoseni, said he was yet to get details.

Meanwhile, the Christian Association of Nigeria (CAN) has declared Sunday 29 April, 2018 as a national day of protest against unending killings in the country.CAN also dedicated the same day for prayers for the freedom and liberty of one of the abducted Dapchi girls, Leah Sharibu, the remaining Chibok girls and others still in captivity of the Boko Haram terrorists.

In a statement yesterday in Abuja, CAN urged Christians in Nigeria to hold peaceful protest on the date on their various church premises, demanding the Federal Government and the security agencies to stop the unending killings and bloodshed across the country.

According to the statement by the Special Assistant (Media and Communications) to the CAN President, Pastor Adebayo Oladeji, the Christians are to carry placards with inscriptions meant to address issues about sustained killings, attacks and destruction of their property in Nigeria.CAN appealed to the government of President Muhammadu Buhari to, in national interest, mount different effective plans aimed towards disarming herdsmen across the northern states and in communities where they have been wreaking havoc across the country.

The group reminded all Christians in the country the importance of the 2019 general election and the need for them to fully participate by trooping to obtain their voter’s cards to vote in a new set of political leaders who could guarantee their safety.The Youth Wing of the Christian Association of Nigeria (YOWICAN) alleged that the serial killings in Christians-dominated towns in the northern region was a full jihad declared on Christians in the country.

The National President of the group, Mr. Daniel David Kadzai, told journalists at the Yola International Airport yesterday that the fabrication of the term herdsmen was a cover-up designed by government to shield the perpetrators of the jihadist activities.He pointed out that the different reasons given for the killings by President Buhari and his security chiefs were a confirmation that government knew those caring out the genocide against Christians, but were covering them with fake reasons.

“The Inspector-General of Police, Ibrahim Idris, said it was farmers-herdsmen clash, the Minister of Defence Mansur Dan- Ali said it was blockage of cattle routes, President Buhari told his foreign host that it was fighters from Libya carrying out the genocide against Nigerian Christians. The question is: if they are fighters from Libya, why is President Buhari not declaring them terrorists? The different narrations of the security chiefs on the killings are a clear testimony that this government is shielding the jihadists,” he stated.

NLC To Buhari: Use Recovered Funds To Critical Infrastructure Development

Reps Calls For Review Of Nigeria’s Membership Of ECOWAS