THE Oyo State Chapter of the All Progressive Congress (APC) has said that the on going ward congress in the state was temporarily delayed after some miscreants led by some party members attacked the state party secretariat at Oke Ado area of the state.

The party in a statement by its Secretary, Mr. Mojeed Olaoya said that the about 150 armed miscreants were allegedly led by the Minister of Communication, Barr Adebayo Shittu who later came in to join the stakeholders’ meeting and a member of the House of Representative, saying that the APC was not deterred by this skirmish as the ward congress is going on with a pre stakeholders’ meeting.

Mr. Olaoya said that the 7-man Congress Committee led by Alhaji Musa Halilu is meeting elected members of the party including Governor Abiola Ajimobi, the Minister from the state, Alhaji Adebayo Shittu, members of the National Assembly including Senator Sumonu and State House of Assembly, some party chairmen, party leaders across Ibadan and the APC executives to allay their fears over the attack, noting that other stakeholders who did not make the meeting are presently at their ward congress venue.

He said that the party will continue to ensure peace reigns in the state, explaining that dissidents are always expected in political circuits and their nuisance value are inevitable.

ALSO READ:  Beyond Don Wanny: The Political Economy Of The Crisis In Omoku
Advertisement
Loading... 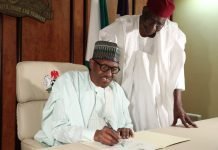 Osun Decides: We Have Discovered 4,387 Votes Removed By INEC From...