THE limitlessness of the elasticity of tourism in orchestrating enviable and sustainable development in any country that explores its potentialities has again been emphasised. This time, at the launching of Project Tourism.

Project Tourism is an initiative, conceptualised by Linas International Limited and jointly promoted by the Nigerian Tourism Development Corporation (NTDC), designed to, among other things project the tourism assets of Nigeria and run profitable projects that will highlight Nigeria’s hospitality culture as well as her rich cultural endowments.

Speaking at the launching on Tuesday in Abuja, former House of Representative member who doubled the Chairman of the project, Hon. Ned Nwoko opined that no country can survive without harnessing the potentials in the tourism sector.

Nwoko emphasized the fact that Nigeria is hugely blessed with tourism potentials, which if harnessed would not only create huge wealth for the country and her people but would also propel unity among the various people in the country and make the country the great nation that she is, making her the cynosure of all eyes in the comity of nations.

Explaining the rationale behind the emergence of Project Tourism, Hon Nwoko said, “The journey did not start today, but long ago when after several decades of travel and painstaking study of how the industry operates in several countries, I came to the conclusion that Nigeria could do it better and tap into the huge economic potentials.”

Giving statistics on tourism potentialities across the globe, Hon. Nwoko quoted the United World Tourism Organisation (UNWTO)’s January 21, 2019 submission that “worldwide international tourists’ arrival (overnight) visitors increased 6% to 1.4billion in 2018 above the 3.7% growth registered in the global economy. Out of this number, the Middle East had +10%; Africa, +7%, Asia and the Pacific and Europe, both stood at +6%. The Americans were below the world average, +3%. 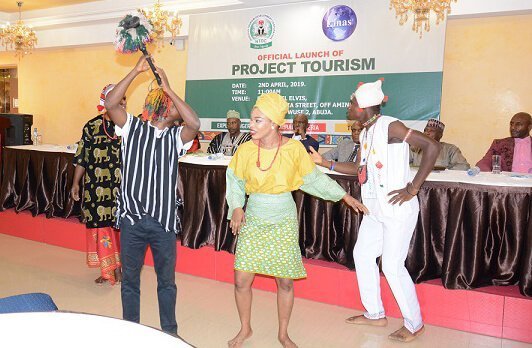 The Culture Village, according to Hon. Nwoko would identify and establish three acknowledged hubs of culture in each of the states, while centres would build on already established/existing monuments, arts and sites.

He added that villages or cities to be so selected for the Culture Village must currently have natural/acknowledged monuments, historical sites and arts, among others, adding that, “location of tourism assets to be safe and accessible, and it would encourage the growth of tourism, using cultural contents.”

The purpose of the Grassroots Sports Development, according to the tourism aficionado, is to identify nurture, encourage, manage and promote talents in all areas of sports at the grassroots levels, including summer school camps. He noted that the aim is to produce sports stars that will compete and excel for Nigeria.

He explained that the Host Family Scheme is, among other things, the compendium of who is who in Nigeria, while it would also host families to have matching interests with prospective tourists.

The Global Road Show, Nwoko disclosed, is an exhibition of the tourism assets of the country, which would be staged with notable Nollywood, sports stars and celebrities from Nigeria on parade.

He revealed that N100million has been earmarked to support and ensure that the global road show commences in July.

Nwoko, therefore called on stakeholders in the tourism sector, to support the initiative as it would boost tourism activities, generate revenue, as well as showcase Nigeria’s cultural heritage.

Tourism stakeholders and Nollywood stars, among others in attendance at the launching threw their weights behind the project and promised good supports that would ensure proper actualisation of the project.

Earlier in his welcome address, the National Coordinator of Project Tourism, Chief Friday Anumba, noted that all the Nigeria tourism industry needed to boom and earn both the nation and her people good benefits is a viable, workable government policy and also, a good relationship between the public and private sector.

“And that is why, today, we are very proud to launch Project Tourism, the first organised public-private initiative to practically promote the Nigeria tourism industry.”

Fani-Kayode Joins APC, Says ‘You Can’t Hold Me For What I Said In The Past’

JUST IN: After Saying ‘I Would Rather Die Than Join APC’, Fani-Kayode Joins APC, Gives Reason

Revealed! Why Iyalaje Oodua Is Mobilizing 250 Iyalojas From South West For Olojo Festival 2021 In lfe