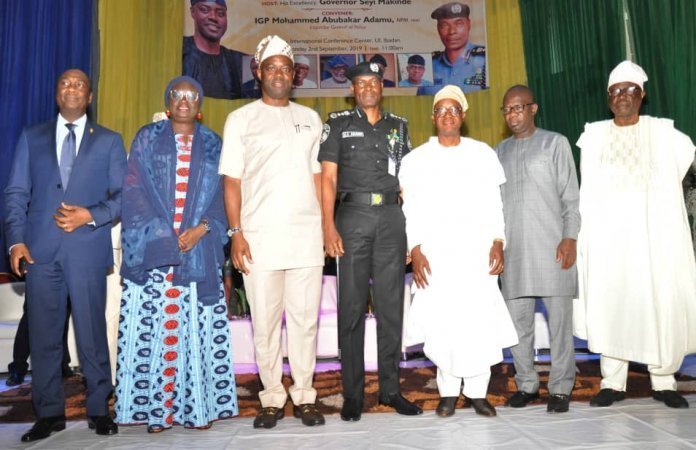 OYO State Governor, Engineer Seyi Makinde, has expressed the commitment of the South-West Governors to work hand in hand with the Nigeria Police, the traditional institution and other well-meaning individuals to ensure the security of lives and properties in the South-West.

This was as the Governor announced that Oyo State would unveil its security roadmap in the next few days, a roadmap he said will focus on the improvement of security infrastructure, awakening of the security consciousness of the people, deployment of technology to combat insecurity and encouragement of partnership on traditional institutions, volunteers and other well-meaning residents of the state on security.

A statement by the Chief Press Secretary to the Governor, Mr Taiwo Adisa, quoted the Governor as making the pronouncements at the South-West Geopolitical Zone Security Summit convened by the Inspector-General of Police, Abubakar Mohammed Adamu, held at the International Conference Centre of the University of Ibadan on Monday.

While delivering an address of welcome at the summit, Governor Makinde said that the state would leave nothing to chance to combat insecurity.

The statement also indicated that the Governor read acommuniqué at the end of the security summit, in which the Governors of South West approved the deployment of Special Forces in the region.

The communique equally stated that the security architecture unveiled by the Inspector General of Police would be commanded by a Commissioner of Police, adding that the CP would lead a SWOT (Strength, Weaknesses, Opportunities and threats) team to support the crime-fighting initiative of the state Commissioners of Police.

Makinde maintained that the South-West States Governors have made a commitment towards the provision of more serviceable, fast-moving patrol vehicles in support of crime-fighting, which shall be launched in no distant future, to complement the available fleet.

He also maintained that traditional rulers in the region have promised to join hands with the Police to fight crimes.

The Governor reeled out the communique thus: “The Oodua Peoples Congress (OPC) has equally agreed to partner with the Police in fighting crime to bring it to the lowest ebb.

“The deployment of cutting-edge technology, like CCTV will be strengthened. Aerial surveillance of flashpoints across the South West Geopolitical Zone to be sustained.

“In order to give effect to the community policing vision of the Nigeria Police Force, Community Policing Officers (CPOs) would be recruited from within the communities where they reside.

“This will complement the Police in law enforcement functions within their localities by performing low-risk and non-sensitive police functions.

“It’s agreed that the committee, consisting of policemen, other security agencies, the OPC led by Chief Gani Adams, Miyetti Allah and the citizenry should be set up in each state.

“This further discusses the modalities on the reduction of crime and criminalities as it affects the state.”

Earlier in his welcome address to the Inspector-General of Police, governors of the South-West states, traditional rulers and other stakeholders, Governor Makinde noted that the deteriorating state of security in the South-West and the country at large have made it inevitable that measures to check insecurity in the zone should be based on a regional approach.

He added that following a similar summit by South-West governors in June, the DAWN Commission was already putting up “a holistic framework for security of the South-West.”

He assured the Inspector-General of Police of South-West people’s support, noting that “the government of the Geopolitical Zone will provide the enabling environment to operationalise the security initiatives being unveiled. We are committed to a safe and secured South-West, and Nigeria at large.”

The governors of the South-West states present at the event were Makinde (Oyo) and Chief Gboyega Oyetola (Osun) while the governors of Lagos, Ogun, Ondo and Ekiti states were represented by their deputies.

Royal fathers who graced the occasion include Oba Adeyeye Enitan Ogunwusi, Ooniof Ife; Oba Akanmu Adetunji, Olubadan of Ibadan; Oba Rilwan Akiolu, Oba of Lagos and Oba Adedotun Gbadebo, Alake of Egbaland, the Olugbo of Ugbo Kingdom, Deji of Akure, Ataoja of Osogbo, a representative of the Alaafin of Oyo and the Soun of Ogbomoso as well as the Aare Ona Kakanfo of Yoruba land, Chief Gani Adams.