A Federal High Court in Abuja on Tuesday has ordered the temporary forfeiture of 23 properties linked to a former Chairman of Pension Reform Task Team (PRTT), Abdulrasheed Maina.

The judge Justice Folashade Ogunbanjo ordered the forfeiture while ruling on a motion filed by the Economic and Financial Crimes Commission (EFCC).

In the suit, the anti-graft agency urged the court to order the temporary forfeiture of the properties.

It also sought the court order to publish an advert of the properties in a national daily, to enable anyone with a reason why the properties should not be finally forfeited to the Federal Government to state their case.

The EFCC supported its motion with a 30-paragraph affidavit which was brought pursuant to Section 17 of the Money Laundering Act.

Delivering her ruling on the motion, Justice Ogunbanjo granted the prayers of the anti-graft agency.

She also ordered the EFCC to return to the court on November 19, for the continuation of the case.

Maina was arrested in the company of his 20-year-old son at the Pennsylvania Avenue Hotel, Utako, Abuja after a request by the Economic and Financial Crimes Commission to the Service to assist in the apprehension of the suspect.

DSS in a statement said Maina’s son Faisal tried to resist the arrest and pointed a pistol gun at the security operatives.

Maina was charged alongside a former head of service Steve Oronsaye, Osarenkhoe Afe, Fredrick Hamilton and Global Services Ltd before a Federal High Court on a 24-count bordering on procurement fraud and obtaining by false pretence in July 2015 but he absconded from the country shortly after.

He was dismissed from service in 2013 after the office of the Head of Service had made some recommendations against him.

Maina was later declared wanted by the EFCC for the past four years for N2.1 billion pension fraud. 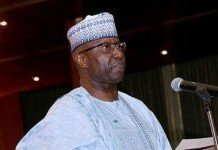 APC Is Responsible For Everything Happening In Nigeria —Okorocha