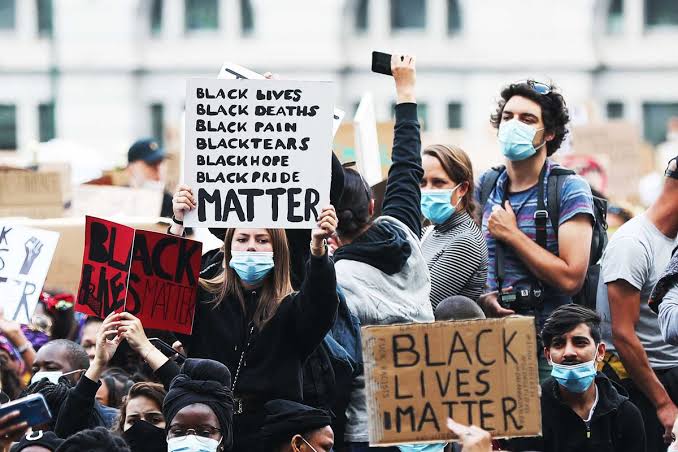 The white world has, in recent weeks, been assisting in reevaluating black lives. They’ve joined blacks to shout ‘Black Lives Matter’ as the world agonises over deadly racism abroad. But how much of value do the blacks place on their own lives, especially in Africa? Is it the destiny of the black man to suffer and be pitied from eternity to eternity? He was the one who suffered slavery and slave trade more than anyone else. He is the one whose experience of colonialism will rankle forever even when other victims have outlived that past.

Ran HaCohen of Tel Aviv University, Israel, in a 2018 journal article examines the concept of blackness and why being white or black would forever play a role in human history. He argues that black, as a colour, has always “suffered from bad reputation” and that even among black people of Africa, “white signifies ‘right, good order, reason, truth, health, generosity, good luck’, whereas black signifies ‘wrong, guilt, envy, intention to kill, grief.’”

Why is it that almost 200 years after slave trade and almost a century after independence, black Africans are still subject to cheap chains and deaths – and pity – everywhere?

A February 2, 2002 article has the title: ‘Africa is a mess, but we can’t blame colonialism.’ The author, Boris Johnson, wrote that piece as a newspaper editor and columnist. The man who is today the Prime Minister of Britain saw Africa and Africans as a horrid blot – a dark mark, a stain, dirt. But, Johnson would forcefully argue the poverty of everything in Africa should stop being seen as a blot on the conscience of the West because of colonialism. Whatever Africa suffers is either self-created or its destiny – which is worse. Johnson’s solution to the black man’s eternal retardation is recolonization, which he hinted was needed if Africa would ever be useful for anything and for anyone, including itself. “The problem (of Africa) is not that we were once in charge, but that we are not in charge anymore…The best fate for Africa would be if the old colonial powers, or their citizens, scrambled once again in her direction; on the understanding that this time they will not be asked to feel guilty.” I am not sure if black dudes who kill themselves and others to live in Europe would squirm at his suggestion.

Born 19 June, 1964, about four years after Nigeria became independent from his country, Johnson is today the British Prime Minister. And there is an ongoing debate in his country on whether he still holds on to those 2002 views about recolonising the continent in order to save it. I would be shocked if Boris Johnson has stepped away from his recolonization pill for the black man’s headache. The immediate spark of that article was his visit to civil-war-wracked Uganda where he met ‘a bunch of millennialist loonies,’ – children of atrocity, war and death: “We were raping, we were killing,” Johnson said one of the kids told him before going on to describe how he murdered a girl who tried to escape. “I cut her up.” Whatever Johnson saw in Uganda in 2002 (18 years ago) was an adequate representation of what Africa truly is in 2020. Honest Africans themselves know that in the continent, things don’t get better; every new day takes the ache from bad to worse. Nothing matters – not life, not death.

If you think I am wrong, think of the epidemic of unremitting evil in Africa. Think of Nigeria, the hopes at independence (before Johnson was born) and the country’s decades of fits and falls. Think of the first republic years of politics without humanity. Think of the killings and recriminations of the years immediately after that republic. Think of the military coups and the wars of the late 60s and the millions who perished. Think of the oil boom and the loss of sense, common and uncommon. Or you can’t remember that we said in the 1970s that money wasn’t our problem but how to spend it? Didn’t Boris Johnson’s British elders and their American cousins, people with sense, quietly come around to help us spend for themselves what we couldn’t spend for ourselves? Think of the prodigal four years of the second republic and the sapping decades of the military that followed that era. Think of 1999 and the joy of a new dawn of democracy and democrats. Think of the failure we have once again made of democracy. Think of today’s reign of thieving mafias and murderous dons and bad leadership.

Shakespeare in King Lear writes about being “more sinn’d against than sinning.” That is what we are. There is always a hidden ‘bloody hand’ behind the black man’s lack of fortune. Last week, Boris Johnson was angry that Black Lives Matter protesters tampered with Winston Churchill’s statue. They called Churchill ‘racist’ and Johnson was livid. He warned that no one should attempt to ‘censor’ or ‘edit’ his country’s past and history. He was probably right. Every nation has its own idea of ‘right’ and ‘wrong’ and of who a hero is, and should be. We blame colonialism and colonialists for our woes but slavery came before colonialism and some black persons’ ancestors built fame, name and wealth from buying and selling their neighbours’ children. And they still enjoy the perks, generation to generation. How many of the local enablers of slavery and slave trade and other historical wrongs face protests in Africa? And after slavery and colonialism, have we not created a more virulent local strain of slave owners and task masters to whom we daily pour libations?

If you were Boris Johnson, British Prime Minister, would you respect a failed, whoring Africa hawking its body and soul to predatory foreign powers? Have we not even bought for ourselves a new coloniser called China through dubious loan agreements? And, so far, there are 17 of such totaling $3.175 billion for Nigeria. China offers you loans but tells you the money must be spent to buy its products. You, like a sheep deep in stupidity, sign off and watch the money dance round your loony face as it goes back to Chinese treasury through its dubious companies. You go back to the phony lender for another unseen loan and the beat goes on and on. And you think your life – and death – would ever matter? There are already very bad, sad songs from the shitholes of Zimbabwe, Zambia, Namibia, Angola and Djibouti. How many more years does Nigeria have before joining this league of sorrowing borrowers?

Black lives cannot matter abroad when it does not in Africa, their homeland. Just this past weekend, another black man was shot dead in Atlanta, United States. That is what you get when the black man’s homeland is a wasteland of disgraceful leaders. It is only an uncooked child that can’t tell the difference between a ripening plantain and a rotting one. And that is what our leaders are. They feed their people to local and foreign gods of greed the way wanton boys treat grasshoppers and seek respect abroad. Indeed, in the 2002 article, Johnson quoted an unnamed British official as telling him: “I’ve been in Africa for ages and there’s one thing I just don’t get. Why are they so brutal to each other? We may treat them like children, but it’s not because of us that they behave like the children in Lord of the Flies.” Yes, the world treats black Africans as children.

The British official was right in his choice of literature and I think that was rather deep – especially when I know what the privileged kids in William Golding’s ‘Lord of the Flies’ did to themselves. Now, if you have not, go and read that novel: the story of a group of well-educated boys who lose their way and promise and minds while stranded on an uninhabited island. They lose their way and start to think tragically with arrogant idiocy. They make very disastrous efforts to govern themselves and live through their misfortune. They fail and descend into savage power contests and primitive accumulation and self-destruction. Even when salvation comes to them through a ship that sails nearby, they let it miss them because they are too engrossed in the inanities of petty power tussle to see the lifeline. What does that story tell you about what you see with the government you have? Think of Nigeria’s Presidential Villa and the family feuds assaulting our collective sanity. Think of the Villa family head whose competence is in drooling while flies eat the lips of decency. Think of records of yesterday losing their truth to today’s politics of money and privileges.

The ‘white world’ is presently teaching us how to revalue our lives. They are punishing white cops who kill black men. They’ve joined hands to shout ‘Black Lives Matter’ on their gilded streets and cities. But, how much of that ‘life’ really matters to the black man in his homeland? Think of the very many innocent Nigerians who have fallen to SARS without consequences. Think of rape, physical and metaphorical, in churches in Nigeria. Think of the 32-year-old Muslim man in Kano whose defence for raping an 80-year-old woman and tens of minors was that it was his destiny to so do. Think of the hundreds that are daily hacked to death in Nigeria’s North-East and North-West and the criminal reintegration of their killers into the Nigerian society by a government elected by you. Think of the deliberate helplessness of the state in making Nigerian Lives Matter. Think of the government man making unearned blood money from tragedies. Think of governments and coronavirus and the billions that will never be accounted for. Think of lives lost yearly to malaria because the unending scourge is unceasing wealth to a caste of men and women in health offices.

Now, finally, I ask: does the black man really think his own life matters – or should matter?