•says Nigerians Will Watch Out For Obasanjo’s Own End

Reporters At Large had earlier reported that Kashamu died of COVID-19 complications on Saturday at the age of 62. He will be buried today in accordance with Islamic rites at his Ijebu-Igbo hometown.

In a message titled, ‘Letter of condolence,’ addressed to Ogun State Governor Dapo Abiodun, Obasanjo, who condoled with the family of the deceased and the state as a whole, also alleged that Kashamu used the instruments of law and politics to evade justice.

TikTok And WeChat: US To Ban App Downloads In 48 Hours

Oyo APC Internal Rancor Will Soon Be Over —Hon Odebunmi

The letter reads in part: “The life and history of the departed have lessons for those of us on this side of the veil. 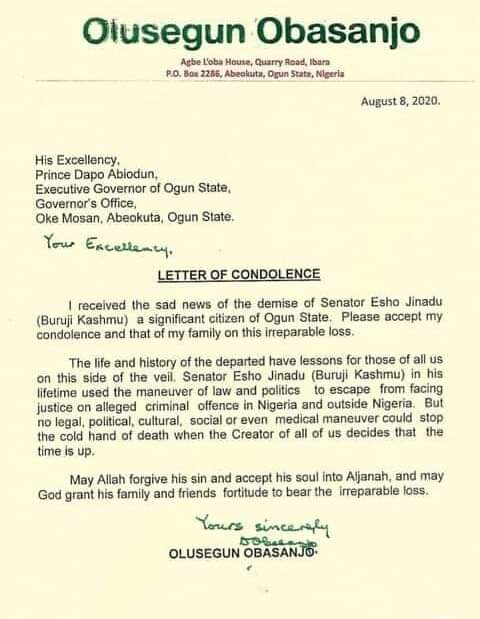 “Senator Esho Jinadu (Buruji Kashamu) in his lifetime used the manoeuvre of law and politics to escape from facing justice on the alleged criminal offence in Nigeria and outside Nigeria.

“But no legal, political, cultural, social or even medical manoeuver could stop the cold hand of death when the creator of all of us decides that the time is up.”

ALSO READ:  APC Is A Bunch Of Deceit - Oyinlola

The former military head of state then prayed that Allah should forgive Kashamu’s sins.

However, reacting to Obasanjo’s letter on Saturday night, Fayose tweeted via his verified Twitter handle @GovAyoFayose: “I commiserate with the family of Senator Buruji Kashamu for this irreparable loss and pray for the repose of his soul. The Almighty God will console those he left behind.

“I also condemn the statement made by former President Obasanjo on his (Kashamu) death. It is regrettable that Obasanjo could say what he said about Buruji Kashamu after his death and when he can no longer question him. Why didn’t he say that when Kashamu was alive?

“Can Obasanjo say in good conscience that he did not, at some point, collaborate with Kashamu and most of the things he (Kashamu) did politically were not with his collaboration?

“Nigerians will watch out for Obasanjo’s own end. He should stop forming a saint because he is not.

He should also remember that his own end will come too and nobody knows how the end will be.”

I am notoriously no fan of Olusegun Obasanjo, General, twice former president and co-architect, with other past leaders, of the...

The Peoples Democratic Party (PDP) has urged President Muhammadu Buhari to come down from his high horse and listen to...

TikTok And WeChat: US To Ban App Downloads In 48 Hours

Oyo APC Internal Rancor Will Soon Be Over —Hon Odebunmi

COVID-19: Presidency Reveals When Survival Fund Will Be Available

Self-Certification Not For All Account Holders, FIRS Reverses Self

All Unused Data Must Be Rolled Over To Next Subscription, NCC Orders Telecom Companies