The Nigerian Air Force (NAF) has winged Flying Officer Kafayat Sanni as the first female fixed-wing fighter pilot in the history of the service.

This is just as the force winged five others who have completed the Tactical Flying Training Course on the Alpha Jet aircraft, for effective and efficient service delivery. 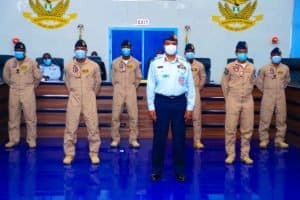 Reporters At Large gathered that Sanni was among the 5 pilots NAF graduated in tactical and basic flying on Tuesday, September 29, in Abuja.

Abubakar said the ceremony was one in the series of remarkable strides of NAF towards the capacity building to reposition the service into a highly professional and disciplined force that would respond swiftly to Nigeria’s security imperatives.

“Today, we have witnessed the decoration of four pilots with their basic pilot wings on completion of their Basic Flying Course.

“And the award of Combat Rating to operational pilots who have completed the Tactical Flying Course on the Alpha Jet aircraft.

“As you are aware, human capacity development is one of the key drivers of the service vision and has indeed received much attention.

“This is evident in the number of personnel that have been trained in various courses, both locally and overseas. Indeed, today’s graduation brings the total number of new pilots winged from 2015 to 118,” he said.

The CAS noted that the pilots had continued to add value to the efforts of the service in dealing with security challenges in the North-East, North-West and other parts of the country headlong.

He also noted that a good number of NAF officers were currently undergoing various pilot training courses overseas, while the indigenous training institutions continued to play a crucial role in the attainment of capacity building initiatives.

“It is, therefore, pleasing to note that 403 Flying Training School, Kano and 407 Air Combat Training Group, Kainji where the graduands were trained to have continued to set the pace in the provision of high-quality fighter pilot training,” Abubakar said.

He reminded them that they could not afford to rest on their oars at this time, adding that they should be aware that the feat they had achieved came with responsibility and as such, much would be expected.

Flying Officer Sanni received the Limited Combat Rating Certificate after completing the Tactical Flying Course on the Alpha Jet aircraft along with another pilot.

ALSO READ:  Creator Of SARS, Fulani Kwajafa Opens Up, Says 'It’s A Thing Of Regret For Me'

Others decorated include 4 student pilots of the Basic Flying Course 19 (Batch A).

The peaceful #EndSARS protests which have since been hijacked by hoodlums took an ugly turn in Anambra state when some...

The Fulani Cattle Rearers Association in Nigeria, Miyetti Allah, has called on the federal government to treat the ongoing #EndSARS...