There was pandemonium in the Federal Capital Territory (FCT) Abuja on Wednesday as #EndSARS protesters were attacked by other groups against the campaign.

The thugs, who stormed the venue around 1pm on Wednesday, reportedly fired gunshots in the air before chasing away the #EndSARS campaigners.

The protesters had blocked the Julius Berger roundabout, Wuse, with disused tyres and stones, and also prevented motorists from plying the route as they occupied the bridge. 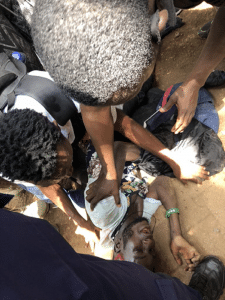 They were singing solidarity songs when their attackers suddenly appeared and assaulted them.

The attackers, who were speaking Hausa language, also vandalised about five cars parked in the vicinity.

However, no life was lost as the police took control of the situation while the injured were taken to the hospital.

This is happening 24 hours after soldiers assaulted the protesters and harassed an Arise TV cameraman at the Three Arms Zone.

When contacted, the Federal Capital Territory police spokesperson, ASP Mariam Yusuf, promised to find out and report back.

Several persons were injured and vehicles vandalised as the invasion of the new groups led to a clash at the popular Berger Roundabout in Abuja.

It was chaos as people scampered for safety and tried to defend themselves as the invading groups attacked the protesters with sticks and machetes, destroying vehicles and anything on their path.

The situation held up vehicular traffic and business activity across the nation’s capital.

Armed policemen and other security agents who were around could not contain the situation.

Meanwhile, despite nationwide agitation against the Special Anti-Robbery Squad (SARS), supporters of SARS under the aegis of Coalition of Civil Society Organisations on Tuesday took to the streets to support efforts of the police in ridding the country of crimes.

The organisation warned that the continuous protests against the SARS operatives were aimed at bringing down the government.

The Chief Convener of COCSO, Olayemi Success, and Co-Convener, Kabiru Dallah, told journalists that the Anti-SARS protesters were being sponsored by internet fraudsters.

The group said, “This solidarity march is very important to boost the morale of the policemen and women, for them to know that well-meaning Nigerians appreciate their sacrifices in securing Nigeria, we are convinced that Police is our friend and everyone that sees police as enemies are suspects.”

The Chairman, Nigerian Governors’ Forum and Governor of Ekiti State, Dr. Kayode Fayemi says there is a need for the...

Lagos State Governor, Babajide Sanwo-Olu, has approved the resumption of civil servants on grade level 12 and below that were...

A U.S. citizen kidnapped at gunpoint in the West African nation of Niger this past week has been rescued in...

US Election 2020: Biden, Trump In Tug-Of-War Over Midwestern US

JUST IN: List Of Successful Candidates Of Amotekun Corps Recruitment Out, Training Commences In Two Weeks

Why I Am Fighting For Biafra, Nnamdi Kanu Reveals