National Leader of the All Progressives Congress (APC), Asiwaju Bola Tinubu, on Saturday, partook in the ongoing registration and revalidation exercise of the ruling party.

Surrounded by some of his men, including Governor Babajide Sanwo-Olu of Lagos, Tinubu posed for photographs at the end of the exercise. 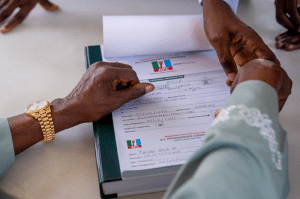 Gboyega Akosile, the media aide of Sanwo-Olu, later shared the pictures on his Twitter account, @gboyegaakosile, and Reporters At Large observed at least two errors on the form.

The gaffes attracted some reactions on social media, among which is that of one AYBOB, a Twitter user, who simply wrote: “Postdated Registration”.