He disclosed this on Sunday in Ibadan during his investiture as the Patron of Nigeria Union of Journalists (NUJ), Oyo State Council.

The colourful investiture attracted prominent Nigerians among whom was the Deputy Governor of Oyo State, Alhaji Rauf Olaniyan.

Akinduro, a medical doctor turned businessman, cautioned newsmen against the promotion of fake news which he said was dangerous to the community. 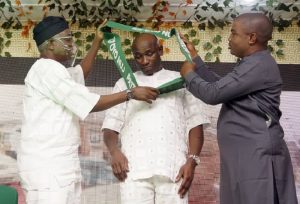 “Journalism is not all about the news. We must verify information about news very well as a journalist before we display them.

“Fake news is dangerous to the community and the most information I want to pass across today is to make sure that all journalist verify their information very well before they display it,” he said.

He also called on journalists to do more on the security challenges bedevilling the nation, urging them to always promote the victory of the Nigerian military over bandits and terrorists.

According to him, “a situation which you promote more of the victory of the military over the incident that happens through Boko Haram and bandits. I think that will help a lot.”

Akinduro thanked the union for appreciating his contributions to society, promising to do more for the union and humanity.

Earlier, Mr Ademola Babalola, the NUJ Chairman, acknowledged Akinduro’s service to humanity which he said was the hallmark of the present administration in Oyo State.

He described the Ondo-born businessman as a God’s vessel who had continuously propagate the ideals of a typical Yoruba man.

According to him, “our new patron is not the richest or wealthiest Nigerian today, but he is wired with the spirit of attending to the needs of the people everywhere.

“For today’s event, we have brought before you, a man so passionate about humanity; an unrepentant philanthropist, a workaholic, a trailblazer, a shining star, an honest, God-fearing, diligent and wonderful personality.

“He is a God’s vessel, propagating ideals of a typical Yoruba Omoluabi. He comes across as a devout Christian having had Deeper Life background as a staunch worshipper for decades.”

Babalola said that Akinduro’s life was full of lessons for nowadays kids who daily seek to become billionaires overnight without minding how those successful businessmen navigated to breakthrough in life.

He expressed hope that Akinduro’s installation would be an added advantage in addressing the needs of the union and members.

Why I Killed My Child, Woman Caught By Police For Throwing Baby’s Corpse Inside River In Ogun Reveals