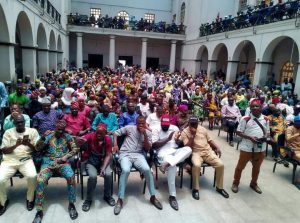 In his speech at the inauguration ceremony, the Chairman of Pace Setter Transport Service, Hon. Dare Adeleke said that the caliber of members that constituted the committees showed the importance the party attached to the election.

He said the PDP is fully prepared to win the election given the achievements of Governor Seyi Makinde in less than 2 years in office.

He urged the campaign committee members to harness the aspirations of the people in the council and ensure that their will prevails.

Speaking with journalists after the inauguration, Hon. Ademola Akeem Ige who is the Chairman Publicity Committee said the committees would do their best to ensure that PDP wins the election, stressing that with the quality of the people in the various committees, the PDP is sure of victory.

Hon. Ademola Ige further said that Engr Seyi Makinde has done so much in terms of delivering dividends of democracy to the people and critical infrastructures in the State in the last 23 months in office; hence the people should reciprocate his gesture by voting enmasse for all the PDP candidates during the local government elections.

Earlier in his welcome speech, the PDP Chairman, Engr Sulaiman Adeshina commended the Governor for his dexterity and leadership quality which he displayed that led to the victory of Ambassador Taofeek Oladejo Arapaja Chairman South West at the recently conducted congress in Osogbo.