The NGO with a bias for Public accountability and pragmatic leadership stated in the petition that its action stemmed from its avowed advocacy to strengthen the Nigerian Public Institutions for accelerated and impactful development using the public interest approach. 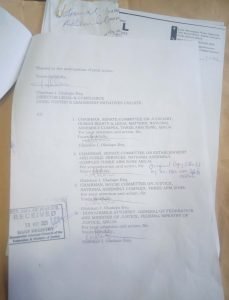 Accordingly, the Organization’s Director, Legal and Compliance, Olalekan Oladapo Esq who wrote on their behalf has consequently threatened legal action if within 3o days notice the issue is not addressed.

In the petition, they alleged that the Commission saddled with the huge responsibility is hamstrung from carrying out its functions efficiently as provided in Section 5 of the Act. 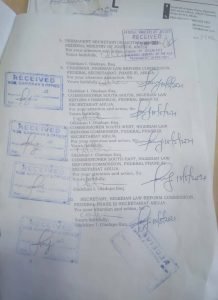 According to the allegation, the Chairman in asserting her position further extended her power by usurping the responsibility of Secretary of the Commission as delegated by Section 11 of the same Act thereby taking over the accounting and auditing functions of the Secretary.

They alleged further that the Secretary and the other Commissioners had no knowledge and input in the 2020 and 2021 budgets proposed to and approved by the National Assembly.

Similarly, they also cited that (Prof. Audi) overturned the Board at will, alleging that She disregarded the board as constituted severally thereby jettisoning the Board’s quarterly meetings in line with Section 5 of the Act.

Citing Section 8 (1) (a) of the Act, they insist that it specifically provides for Section 11 of the same Act, where according to the petition the Secretary is also the accounting officer, who also accounts for the budget and financial estimates of the Commission.

“Based on the above provisions, it could be established that (i) there is the delineation of the role of the financial responsibility between the political head and the Accounting officer of which such role is not contemplated for or combined in one person. Therefore, the Chairman of the Commission is undoubted, the Political head and the Secretary is the Accounting Officer of the Commission by Section 8 (1) (a) and 11 of the extant Act establishing the Commission.

ALSO READ:  #EdoDecides2020: Oshiomhole Breaks Silence, Says 'I Am Not Down'

Also, the petition implored the Chairman to recognize, respect and honour the Commission’s Board in the course of performing their statutory roles.

Meanwhile, all efforts to reach out to the Nigerian Law Reform Commission’s Chairman, Professor Audi to react was futile as she neither picked several calls put to her nor reply message sent to her MTN and Airtel number as at the time of filing this report.

In the same vein, the Solicitor General and Permanent Secretary, Federal Ministry of Justice, Mr Dayo Apata, SAN could not be reached to ascertain steps taken so far about the petition.

Can Europe, US, South America Learn From South Africa’s Ministry Of Health Response To First And Second COVID-19 Waves?

We Are Designing New Business District For Ibadan -Makinde

We Are Designing New Business District For Ibadan -Makinde