The Special Adviser to the Oyo State Governor on Culture and Tourism, Hon. Akeem Ademola Ige has promised to continue to give moral and financial support to the youth towards developing their God-given talents.

Hon. I stated this while hosting the organizer of the Most Beautiful Yoruba Girl Beauty Pageant and winners of the said competition in his office yesterday.

The organizer of the Beauty Pageant competition was in Hon. Ige’s office to present the winner and the other four runner ups to him and also to thank him for the support he gave to the winner, Miss Ilori Ayotomide in the build-up to the final stage of the competition.

While addressing the visitors in his office, Hon. I commended the organizer for organizing a befitting, credible and level playing contest for the participants, saying that the contestants were given chance to showcase their gifts and talents to the world as well as contributing to the promotion of culture and tourism in the state. 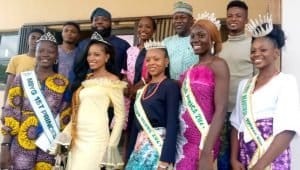 Hon. Ige who congratulated the winner and all the other four runner ups for their brilliant performances, enjoined them to see their success as a wake up to be prepared to face future challenges.

He disclosed that he decided to support the winner of the competition having observed that part of the programme was in tandem with Governor Seyi Makinde’s vision to promote culture and attract investors within and outside the country to tourism sites in the State.

Hon. I further charged the youth to always use their talents and time in a more productive way instead of engaging in negative things that will ruin their future.

Earlier in her remark, the organizer of the event, Miss Olamide Adeleke hinted that the group was in the office of Hon Ige to present the winners to him and also to express their gratitude to him for the financial and moral support he gave to the winner of the contest, Miss Ilori Ayotomide.

They equally appreciated Hon. Bolanle Sarumi Aliyu, Senior Special Assistant to the Governor on Diaspora matters and Hon. Kazzem Bolarinwa for their support as well.

The winner of the contest, Ilori Ayotomide
who hails from Ibadan North-East local government area hinted that her intention within the one year she would spend in office was to bring the Yoruba culture back to life, showcase it to other non-Yoruba states and most especially inculcating the speaking of Yoruba language among the students from the elementary school in the region.

She, however, dedicated her success at the competition to the wife of the Governor of Oyo State, Mrs Tamunomini Olufunke Makinde for her passion and contribution towards girl- child and violence against women in the State.

Also in attendance during the visit were the Regional Manager South West of Sterling Bank plc, Ms Funke Usalum and Zonal Head, Ibadan branch of the bank, Ms Kassandra Obioha. They assured that the bank will look at what to do to assist the winners in the task ahead of them.

According to Olamide Adeleke that organized the event, 62 individuals participated at the preliminary stages, 18 made it to the final stage of the competition that was held at Jogor centre Ibadan last Saturday where the Most Beautiful Yoruba Girl and other four runner ups emerged. They were expected to spend one year in office before their tenure expires.