The royal blessings were showered on Hon Oladayo during his visit to the royal fathers at the Traditional Council office within the LG Secretariat.

His Royal Majesty, Oba Lateef Gbadamosi Adebimpe, Osi Balogun of Ibadanland, Chairman Ibadan North Local Government Traditional Council and representative of the Olubadan, His Imperial Majesty, Oba Soliu Akanmu Ajeogungunniso 1, while praying for the chairman, charged the chairman’s followers not to derail him but to at every time give him advice that will write his name in gold. 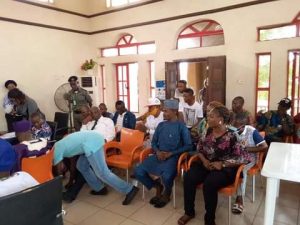 Ekefa Olubadan, Oloye Lekan Alabi, in his remarks advised Agba Egbe to always propagate the Yoruba tradition, culture and values saying that Yoruba culture is the best in all ways and must never be seen as second class. “We must showcase our culture to the whole world irrespective of wherever we find ourselves.”

Ekefa Balogun Olubadan, Senior Chief Barrister Sharafadeen Alli who was the pioneer executive chairman of Ibadan North Local Government appealed to the councillors to cooperate with the chairman for the progress of the council area calling their attention to the fact that disagreement would surely arise but they should at every point resolved them amicably. He advised the chairman to always with divine wisdom dissect and do away with false reports in respect of any issue or anyone.

Chief (Mrs) Taiyewo Soyege, Osi Iyalode of Ibadanland, said that pride and arrogance must be relegated to the backyard for anyone to succeed in office. She said that the LG executives needed to be truthful in all dealings to preserve their good names.

In her words she vehemently advised Hon. Oladayo to accord the traditional rulers their deserved honour and benefits pointing out that going contrary to it will definitely backfire.

In his response, Hon. Oladayo appreciated the obas and the chiefs for receiving and praying for him. He promised to make good use of all the royal counsels given him.

Earlier, Head of Local Government Administration HLGA Pastor Olumuyiwa Olaoye while introducing the chairman to the traditional council eulogized Hon. Oladayo for his humility promising that the chairman would be in a close relationship with the rulers and at every time feed them with the developments in the council area.

Present during the visit was all the councillors led by the Leader of the Legislative House, Hon. Onatunji Kazeem Akin and the Director of Administration and General Services (DAGS), Mrs Mosunmola Oyewale.