CLIMATE science has progressed so much that experts can accurately detect global warming’s fingerprints on certain extreme weather events, such as a heat wave, according to a high-level scientific advisory panel.

According to MailOnline  reports, for years scientists have given almost a rote response to the question of whether an instance of weird weather was from global warming, insisting that they can’t attribute any single event to climate change.

But ‘the science has advanced to the point that this is no longer true as an unqualified blanket statement,’ the National Academies of Sciences, Engineering and Medicine reported.

Guinea Coup Leader Reveals When New Govt Will Be Formed

How Military Took Over In Guinea, Detained President 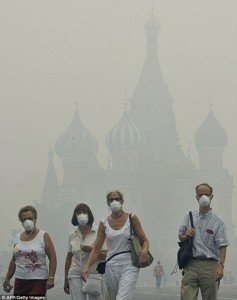 Starting in 2004, dozens of complex peer-reviewed studies found the odds of some extreme events — but by no means all — were goosed by man-made climate change.

This new field of finding global warming fingerprints is scientifically valid, the academies said in a 163-page report released Friday.

The private non-profit has advised the government on complex, science-oriented issues since the days of President Abraham Lincoln.

When it comes to heat waves, droughts, heavy rain and some other events, scientists who do rigorous research can say whether they was more likely or more severe because of man-made global warming, said academies report chairman David Titley, a Pennsylvania State University meteorology professor. And that matters.

‘While we plan for climate, we live in weather,’ Titley, a retired Navy admiral, said in an interview. ‘These extremes are making climate real when in fact they are attributable to climate change.’

Not all weird weather can be blamed with any degree of certainty on global warming, according to the report.

Hurricanes and other tropical cyclones, wildfires and severe thunderstorms are on the low end of the confidence range, the report found.

In some cases heat and lack of rain combine and the studies find a viable connection to global warming, such as in the recent four-year California drought and the drought that hit Syria and neighbors, Titley said.

He wasn’t part of the study, but is on the board of Climate Central, which manages a large climate attribution project.
Good attribution studies are based on what Titley calls a ‘three-legged stool’ of observational records of decades of past events, detailed understanding of the physics that cause the weird weather itself, and sophisticated computer models that simulate the chances of the extreme event if there were no man-made, heat-trapping gases warming the atmosphere.

‘It’s just like an autopsy,’ said Martin Hoerling, a National Oceanic Atmospheric and Administration research meteorologist who has conducted several attribution studies, finding a climate change connection in some events and not finding a link in others.

‘We’re following the data wherever it goes.’

Titley said attribution studies are ‘based in physical science and statistics that don’t value Republicans or Democrats.

‘The ice just melts. This has nothing to do with politics.’

These studies don’t say an event was 100 percent caused by climate change. They usually say chances were increased by a certain fraction.

Katharine Hayhoe, a Texas Tech climate scientist who wasn’t part of the study, praised the work: It is ‘very important to clarify to people how no event is black or white: No individual weather event can be said to be ‘solely’ human nor ‘solely’ natural any more. They are somewhere on the sliding scale between.’

But other scientists don’t like the idea of looking at single events.

Climate change caused by man ‘has fingerprints in every weather event we experience today,’ wrote Oklahoma University meteorology professor Jason Furtado, who wasn’t part of the study. ‘Disentangling the contribution of climate change with natural variability for a single event is not fruitful or currently possible in my opinion.’

Eventually, Titley hopes, the science of climate change fingerprint detecting will advance so that meteorologists can make testable forecasts of a certain number of extreme events in a season.

Guinea Coup Leader Reveals When New Govt Will Be Formed

How Military Took Over In Guinea, Detained President

Fani-Kayode Joins APC, Says ‘You Can’t Hold Me For What I Said In The Past’

JUST IN: After Saying ‘I Would Rather Die Than Join APC’, Fani-Kayode Joins APC, Gives Reason