Trump, who will be at a campaign rally in Dayton, Ohio, on Saturday, canceled the Chicago event on Friday after it turned chaotic, with scuffles breaking out between protesters and backers of the real estate magnate.

“The organized group of people, many of them thugs, who shut down our First Amendment rights in Chicago, have totally energized America!” Trump said on Twitter.

The First Amendment to the U.S. Constitution protects freedom of speech and assembly. The Chicago rally came ahead of five primary elections on Tuesday, including contests in Ohio and Illinois.

Trump has drawn fervent support as well as criticism for his calls to build a wall along the U.S.-Mexico border and to impose a temporary ban on Muslims entering the country.

His rallies often attract small groups of protesters, but Friday’s was the first at which there may have been as many protesters as supporters.

Asked by CNN interviewer Don Lemon if he would take back anything he had said, Trump said: “Now, getting back to before tonight, when I talked about illegal immigration, I have no regrets whatsoever.”

“If I didn’t bring up illegal immigration, it wouldn’t even be a subject of the campaign,” he added.

At the University of Illinois-Chicago stadium rally the two sides shouted at each other until a Trump staffer appeared and said the event would be put off until an unspecified date for security reasons.

The cancellation followed an appearance by Trump in St. Louis on Friday during which protests forced him to halt his speech repeatedly.

In statements, Republican rival candidates Ted Cruz and Marco Rubio both called the incident “sad” and said the protesters should have let the rally happen.

Trump has a significant lead in primary contests over the three remaining Republicans vying for the White House. He is looking to cement it on Tuesday.

“And that toxic environment has allowed his supporters, and those who seek confrontation, to come together in violence.”

(Reporting By Emily Flitter and Fiona Ortiz; Additional reporting by Catherine Koppel in Chicago and Ian Simpson and Amanda Becker in Washington; Editing by Mary Milliken)

This article was funded in part by SAP. It was independently created by the Reuters editorial staff. SAP had no editorial involvement in its creation or production. 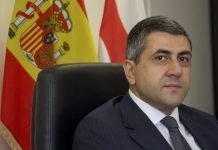 US To Allocate $10m To NGOs, Colleges To Fight Extremism