GREEN tea is known for its many health benefits as a powerful antioxidant.

It is the beverage of choice for the health-conscious among us, complementing a diet rich in other ‘superfoods’, kale and spinach among them. 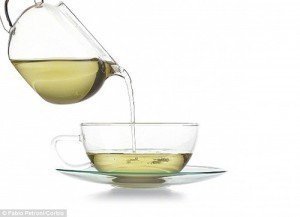 But, scientists have found consuming green tea with foods rich in iron can cause the beverage to lose its antioxidant powers.

US Election: I Will Never Concede To Fake Ballots, Donald Trump Swears As He Lets Transition To Biden Begin

Study author Dr Matam Vijay-Kumar, of Penn State University, said: ‘If you drink green tea after an iron-rich meal, the main component in the tea will bind to the iron.

‘When that occurs, the green tea loses its potential as an antioxidant.

‘In order to get the benefits of green tea, it may be best to not consume it with iron-rich foods.’

The team of scientists investigated the effects of green tea and iron in laboratory mouse models of inflammatory bowel disease (IBD).

The disease involves chronic inflammation of the digestive tract – and typically entails diarrhea, pain, fatigue, weight loss and other symptoms, such as iron deficiency or anemia.

Consuming green tea is believed to be beneficial for IBD patients because EGCG – the main component in green tea – can inhibit the enzyme myeloperoxidase.

The enzyme is pro-inflammatory, and released by white blood cells during inflammation.
And so, to mitigate IBD flare ups, people often seek to inactivate myeloperoxidase.

However, when EGCG and iron are consumed simultaneously, EGCG binds to iron and loses its ability to inhibit the enzyme.

Furthermore, the scientists also found that EGCG can be inactivated by a host protein – which is highly abundant in inflammatory conditions.

Thus, the scientists determined that ingesting green tea and iron supplements – or eating iron-rich foods – at the same time would be counterproductive, as both would cancel each other out.

Dr Vijay-Kumar said: ‘It is important that IBD patients who take both iron supplements and green tea know how one nutrient affects the other.

‘The information from the study could be helpful for both people who enjoy green tea and drink it for its general benefits, as well as people who use it specifically to treat illnesses and conditions.’

Another study author, graduate student Beng San Yoeh, added that the benefit of green tea is dependent upon the bioavailability of its active components.

Mr Yoeh said: ‘It is not only a matter of what we eat, but also when we eat and what we eat it with.’

The study was published in the American Journal of Pathology.

US Election: I Will Never Concede To Fake Ballots, Donald Trump Swears As He Lets Transition To Biden Begin

Donald Trump may have finally allowed the transition to Joe Biden to begin but the president has made clear he...

United States President-elect Joe Biden solidified his victory over President Donald Trump on Friday after the state of Georgia went...

BREAKING: FG Set To Reverse Pump Price To N160 Per Litre After Meeting With Labour Leaders

How We Sold Burnt Heads Of Two Policemen To Native Doctor For N1,000 -Suspects

Wike Reveals What Will Happen If Buhari Fails To Restructure Nigeria