Warning: Use of undefined constant TDC_PATH_LEGACY - assumed 'TDC_PATH_LEGACY' (this will throw an Error in a future version of PHP) in /home/customer/www/reportersatlarge.com/public_html/wp-content/plugins/td-composer/td-composer.php on line 114

Warning: Use of undefined constant TDSP_THEME_PATH - assumed 'TDSP_THEME_PATH' (this will throw an Error in a future version of PHP) in /home/customer/www/reportersatlarge.com/public_html/wp-content/plugins/td-composer/td-composer.php on line 118
 Equatorial Guinea Conferred Highest National Honour On Buhari  | Reporters At Large
Upgrade

PRESIDENT Muhammadu Buhari has been conferred with the highest national honour of the Republic of Equatorial Guinea.

According to a statement by his Special Adviser on Media and Publicity, Mr. Femi Adesina, the President was conferred with the national honour in Malabo on Monday for his personal integrity, exemplary leadership style and courage to fight terrorism in order to ensure peace and safety in Africa. 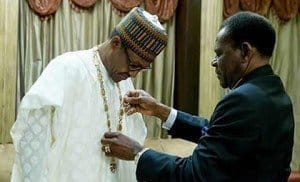 The honour of “Gran Collar De La Orden De La Independencia” translated “Grand Collar of the Order of the Independence” was said to have been conferred on Buhari by President Teodoro Obiang Nguema Mbasogo of Equatorial Guinea at the Presidential Palace.

Nigeria Has No Direction, No Captain – Secondus

At the investiture ceremony, Buhari reportedly said the recognition was for the people of Nigeria who had worked tirelessly to sustain peace in the country and across other neighbouring countries in Africa.

“On behalf of my country, Nigeria, and the people, I will like to express profound gratitude for the honour given to me and my people. The reality of the situation now is that there had never been a time in history for greater neighbourliness, for security and economic stability than now,” he said.

Buhari assured the people that Nigeria would always support efforts of ensuring socio-political and economic stability of its neighbours and the entire African continent.

Earlier in his remarks, Mbasogo said it was an honour for his country to confer the Highest National Honour on Buhari on his first visit to the country.

“We are here to recognise the son of the soil. On this occasion, we deem it fit and appropriate to decorate the son of Africa for the great work he is doing in Africa, which includes tackling a great menace to the continent, Boko Haram, ” he said.

The President pledged his country’s support to Nigeria in the fight against insurgency and other security challenges.

The Police Command in Nasarawa State has vowed that it will fish out the killers of Mr Amos Obere, the...

Nigeria Has No Direction, No Captain – Secondus