THE Code of Conduct Tribunal has fixed March 24 for ruling on a motion by the Senate President, Dr. Bukola Saraki, seeking to quash the charges of false assets declaration preferred against him.

The Danladi Umar-led tribunal fixed the date for ruling after entertaining arguments for and against the motion. 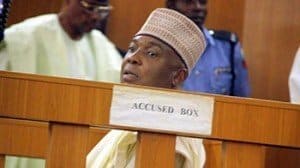 Saraki’s lawyer, Chief Kanu Agabi (SAN), argued that the tribunal lacked jurisdiction to entertain the charges, on among other grounds, that the Attorney-General of the Federation and Minister of Justice lacked the powers to file charges before the tribunal.

He also argued that the failure of the Code of Conduct Bureau to invite Saraki to confront him with the breaches in his assets declaration form was fatal to the validity of the charges.

But the prosecuting counsel, Mr. Rotimi Jacobs (SAN), urged the tribunal to dismiss the motion, as same constituted an abuse of court process.

He described the motion as absurd and ridiculous on the basis that Saraki had initially in a similar motion argued up to the Supreme Court level, contended that the charges were incompetent for being filed at a time the office of the AGF was vacant.

The Supreme Court in its judgment on Saraki’s earlier objection to the trial affirmed the validity of the charges and the jurisdiction of the tribunal.

Saraki was represented by 80 lawyers at the Friday’s proceedings while the prosecution by 10.