THE Senate, on Wednesday, expressed disappointment over the failure of the Minister of Finance, Mrs Kemi Adeosun, to appear before the lawmakers, to brief them on the state of the nation’s economy.

Adeosun was expected to appear before the senators on Wednesday, after the lawmakers had received the briefing on the state of the nation’s economy from the Governor of Central Bank of Nigeria (CBN), Dr Godwin Emefiele, on Tuesday.

At the sitting on Wednesday, Senate Leader, Ali Ndume, however, informed the Senate that the minister, based on latest message received from her, could not appear before the lawmakers.

He said that based on the last message he got from the minister, she would be attending the Federal Executive Council ( FEC) meeting holding at the Villa, on Wednesday.

Senate Minority Leader, Senator Godswill Akpabio, in his reaction, said that the minister was guilty of act of omission, wondering why she did not remember that the FEC meeting would take place on Wednesday, when she assured the Senate of her readiness for appearance.

Senate President, Dr Bukola Saraki, was equally disappointed by the minister’s failure to appear, saying it was very pertinent that she took the Senate summon seriously.

Saraki, in his ruling, ordered that the minister should unfailingly appear before the Senate on Thursday.

He said: “The minister must unfailingly appear before us today, before we proceed on long recess, because the issue at stake centres on monetary and fiscal policies being adopted by the Federal Government to salvage the current economic situation.

“As remarked by the Minority Leader, the minister should not have assured the Senate of her appearance on a day she knows that FEC meetings take place. She must definitely appear tomorrow ( today), so as to brief us on what and what measures or strategies being taken to remedy the economic problems at hand.”

However, the Special Assistant to the Minister, Festus Akanbi, told newsmen in a telephone interview that his boss would appear before the Senate on Thursday.

He said: “The Minister of Finance, Mrs Adeosun would appear before the Senate on Thursday (today) to brief the senators at plenary on the state of the nation’s economy.”

Akanbi explained that Adeosun would have appeared on Wednesday, but for the weekly FEC meeting.

He added: “The minister actually rushed to the Senate immediately after the FEC meeting, but unfortunately, the plenary had been adjourned.

“She, however, met with the Senate leadership and pleaded with them to give her today to brief the senators on the state of the nation’s economy.”

The Senate had, on Tuesday, hosted the CBN Governor, Emefiele, in a closed-door session, during which he highlighted the state of the economy to the lawmakers. 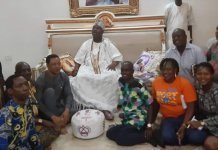