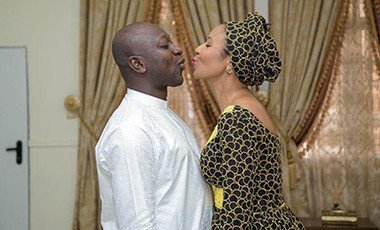 FEW minutes after former ex-Chairman of the Appropriation Committee of the House of Representatives, Hon. Abdulmumin Jibrin, was banned by his party, All Progressives Congress (APC), from issuing any public statement on the issue of the padded Budget, Jibrin resorted to romantic online posts.

At about 6.00pm on Thursday, shortly after he received the message, Jibrin took to his Facebook page and posted a photo displaying himself and his wife in a romantic mood, saying “Since I can’t post anything else, let me just celebrate my wife.”

Contained in a letter issued on Thursday by the party’s Deputy National Chairman, Senator Lawal Shuaibu: “Arising from the series of meetings we held with you over the budget matter, the National Working Committee had decided to request to henceforth avoid issuing any public statement.”

I Should Have Been In PDP Since —Obaseki

APC Crisis: Buhari Made Me Chairman In 2018 To Reposition Party ― Oshiomhole