THE rejuvenation, development and promotion of the Yoruba culture, heritage and tradition, is no doubt on the fast lane, as efforts are being intensified to ensure this. At the forefront of the campaign is the Ooni of Ife, His Imperial Majesty, Oba Adeyeye Eniitan Ogunwusi (Ojaja II). The latest of his efforts in this direction is the just concluded Moremi Beauty Pageantry, held last Saturday night, at the palace, in Ile Ife, Osun State.

Speaking after he crowned the Face of Moremi, the first-class monarch who expressed satisfaction towards the success of the maiden edition of Moremi Beauty Pageantry, said this would not be the last of the event, “we will work on the survival of the beauty pageantry, which is borne out of the dare need to immortalize Moremi Ajansoro, who is not only an Ife heroin, but a Yoruba’s heroin.”

Oba Ogunwusi, who described the event as historic and memorable said Yorubas should not, for any reason, mortgage their culture, tradition and heritage for anything in the world.

His words: “Today is memorable. This is our culture in a raw form. Today it is a day when one of the great Moremi Ajansoro, a woman of tremendous beauty who sacrificed her only child to free the people of Ife from the invasion of some faceless terrorists thousands of years ago. It is a day we used to celebrate our ancestor, who had played a pivotal role in our history.

“Though, it is rather, not interesting that we are fast losing tract of our culture and heritage. And if we should jettison our culture and focus on the borrowed culture, we will never see anything good in what belongs to us. Many youths do not know our culture again. They now promote foreign culture. We must not allow this. Our culture is our culture irrespective of western religion affiliate.

“I hereby challenge other custodian of culture to emulate a programme like what we have today to propel the rejuvenation, development and promotion of our culture, tradition and heritage, which are so rich and highly enviable.”

Director-General of the Nigerian Tourism Development Corporation, Mrs Sally Mbanefo, earlier in her address described the newly unveiled gigantic Moremi Status in Ile Ife as a major tool for promotion of domestic tourism, while she commended the strides of the monarch towards developing and promoting domestic tourism in Osun State.

Represented by the Assistant Director, Hospitality and Travel Trade, Mr Odinaka Anumba, the NTDC boss described the monarch as a unique personality not only to the Yorubas but also to the cultural tourism sector and the diaspora.

Her words: “It is on record that on assumption as the Ooni of Ife, Oba Adeyeye Ogunwusi (Ojaja II) with the approval of the Ooni in Council confirmed on me, the title of Moremi of Ife.

“His Imperial Majesty’s vision in putting together the Moremi Statue, which is the tallest in Nigeria and third in Africa, is a major landmark in domestic tourism promotion as it constitutes a revenue spinner to the economy.

“Oba Adeyeye’s major goal included attracting foreign investments as a source of economic development of the Yorubaland in particular and Nigeria in general.

“Since his coronation, Ile Ife had witnessed a turnaround, especially in the areas of agriculture, youth development, infrastructure and tourism revelation, leading to the rejuvenation of some festivals like Olokun, Osara, Oramfe and Olojo, just to mention a few, face-lifting the shrine and rebranding them.”

Mbanefo, who lauded the virtues of Moremi Ajasoro, describing her as a brave amazon, who in orther to deal with the problems facing her people offered anything she had to give in sacrifice to the spirit of the river, Esimirin, so that she could discover the strength of their enemies, called for the empowerment of the Nigerian women.

“Queen Moremi Ajasoro was known for bravery, passion to fight for the women folk. Her personality remains distinguished amongst other Princesses of the land. The Likes of Moremi were also seen in other parts of the country, like Margaret Ekpo who led the Aba women riot in the South-East of Nigeria in 1929; Queen Aminat of Zaria in the North who was a warrior and who established government amongst her people in 1836. Today, we still have a lot of Moremis amongst us, and this calls for empowerment of more Nigerian women in view of their strategic roles in nation building,” Mbanefo said.

Ogun State Commissioner for Tourism, Rt Hon Olumuyiwa Oladapo Oladipo, appreciated the love of the Ooni of Ife in the promotion of development of culture, tradition and heritage of the Yorubaland.

“When I came to the Ooni of Ife prior the maiden edition of Nigerian Drum Festival and displayed my displeasure towards the dwindling of the Yoruba culture, Oba Adeyeye said ‘God made me the Ooni of Ife to save the culture, tradition and heritage of the Yorubaland. Our culture shall not die,” Oladapo said.

He then charged the organizer on the continuity of the Moremi Beauty Pageantry, saying “Government cannot do it alone, especially with the present time of recession.”

ALSO READ:  4G LTE In Nigeria: What To Expect

The beauty pageant was laced with electrifying performances from different artistes. Among them is the fast growing classic entertainer and saxophonist, Elusiyan Eluwole popularly called Omo-Elu, who was not economical in dishing out his unique genre of music which is a blend of Afro and Hipop.

The beauty pageant got to the peak when Animashaun Blessing, a medical practitioner, emerged as the Face of Moremi, with Fashina Abodede coming second and Olowokere Olayinka came third.

Blessing in a brief chat with ReportersAtLarge, described her success at the contest as the act of God, saying “Inasmuch as I was hopeful of winning, it was only God who made it possible for me. At a point, I lost the hope of becoming the Face of Moremi, but God, the All-Knowing one, showed me mercy and ensured my emergence.

Atiku to Buhari: I Will Dislodge You, With Or Without US... 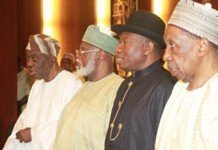 Buhari, Former Presidents, Others In Closed-Door Meeting Of Council Of State