FORMER Delta State Goverbor, James Onanefe Ibori, who was released from prison in the United Kingdom (UK) last December, has arrived in Nigeria after British authorities deported him.

Mr. Ibori arrived at Nnamdi Azikiwe International Airport Abuja on Saturday morning without the knowledge of most of his associates or friends as his departure from the UK was determined by British authorities, rather than planned by the former governor turned convict himself.

Mr. Ibori arrived in Abuja unheralded, with no friends or family to welcome him at the airport. Instead, officials of the Department of State Service (DSS) picked him up. A DSS official told SaharaReporters that Mr. Ibori was still in their custody and was undergoing interrogation in Abuja, Nigeria’s capital city.

A statement by the UK embassy in Nigeria and obtained by SaharaReporters showed that former Governor Ibori was deported from Britain aboard a British Airways flight.

It is unlikely that the former governor will arrive today in his hometown of Oghara in Delta State where a throng of his supporters have been organizing a raucous welcome to mark his release from British prison where he served a 13-year sentence. British authorities gave the former governor credit for the time he was held in detention in the United Arab Emirate.

Former Governor Ibori had submitted a guilty plea in a Southwark Crown Court in the UK where he was charged with numerous counts of looting public funds in Nigeria and laundering the said funds through financial institutions in the UK. 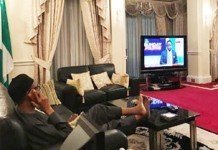