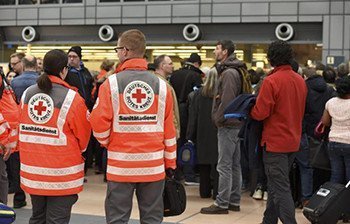 GERMAN authorities on Sunday briefly closed the airport in the northern city of Hamburg after a discharge of a corrosive substance caused eye irritation and breathing difficulties among 50 people in a security check area, a police spokeswoman said.

Firefighters and ambulances were rushed to the scene after the incident, which occurred in an area where passenger luggage is scanned by security staff.

Firefighters are trying to determine the source of the discharge and the nature of the corrosive substance.

Lightly dressed passengers were rushed outside the terminal but were allowed back in shortly after, the police spokeswoman said.

According to live flight tracking website flightradar24.com some flights were diverted to other airports after the incident.

Music House Demolition: What Happened At The Meeting With Ajimobi –...