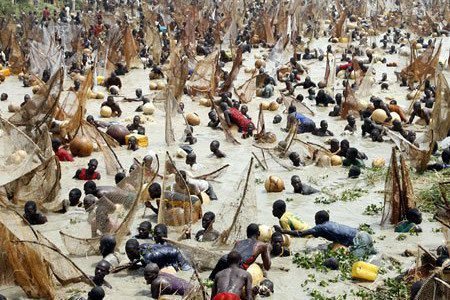 THE Emir of Argungu, Alhaji Samaila Mera, on Sunday said the popular Argungu Fishing and Cultural Festival would hold in March, 2018 and would feature polo as one of its events.

The News Agency of Nigeria (NAN) reports that Mera made the remarks during a courtesy call by Francis Ogboro, the President of the Nigeria Polo Federation (NPF) and his officials to the Emir’s palace.

The four-day yearly festival, held in Kebbi State, is one of Nigeria’s internationally recognised tourism attractions.

But unfortunately, it has not been held since the last edition in 2009, posing a huge revenue loss to the local economy and the country.

The Emir, however, said plans were on ground to ensure the festival held next year.

“We are working together with the State government to make sure that the festival is staged next year.

“We are in the process of appointing a Director-General for the festival, create a Secretariat and start making contacts with our various sponsors as well as the various stakeholders.

“As you know, the festival has now been inscribed in the World Heritage list which makes the United Nations a stakeholder in the festival.

“So, immediately the director-general is appointed, we will have a tripartite meeting between the State, the Federal Government and the United Nations, who are the major stakeholders in the festival.

“From that meeting, we should be able to announce to the world when the next festival will hold which will definitely be sometime in March next year, Insha Allah,” he said.

He also noted that there was a great potential in the polo tournament being part of the festival, adding that the tournament had continued to evolve and grow over the years.

“The festival started with just the main event, which is the grand fishing.

“Today, we have about seven to eight major events making the entire festival.

“Therefore, this has huge potential in my opinion of becoming one event amongst so many to hold during the festival,” he said.

He explained that the reason for the lengthy delay in holding festival was largely due to the security situation the country had been faced with for quite a while.

“You know the festival is such that attracts people like no other festival in the country.

“In our wisdom, we felt that it was a kind of opportunity the miscreants in our society will want to take advantage of to attack and cause maximum damage.

“So, we were not prepared to take that chances.

“Alhamdullahi, peace has come to most part of the country and we felt it is safe enough to stage it at this time.

“Hopefully, next year Insha Allah it will hold,” he said.

In his response, Ogboro said he and the entire NPF family were very honoured to have been personally invited by the Emir to witness the maiden Argungu polo tournament.

“I am very excited that polo has come to Argungu for the first time in the history of the state and I am proud to have been part of this historical event,” he said.

He said the NPF would work harmoniously with NSK Farms, the sponsors, as well as the state government to ensure that the dream became a reality.

He added that the game of polo, would indeed, be a plus to the festival as it had the potential of attracting people from all over the world.

ALSO READ:  Japan Is Suffering From A Ninja Shortage Amid Huge Demand From Foreign Tourists

“The benefits are, indeed, numerous for this part of the country as well as the entire nation,” he said.

The Argungu Polo Tournament which was organised by Alhaji Nura Kangiwa, the patron of the NSK Farms galloped on Friday and ended on Sunday.

My Husband Starves Me, Divorce Us, Wife Tells Court