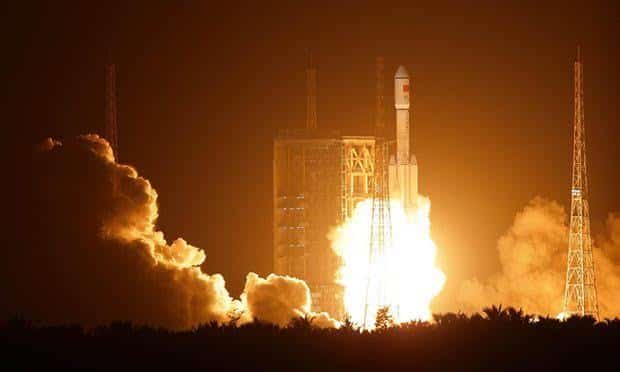 FOR years, its space programme was shrouded in secrecy. Now, with plans for lunar and Mars missions, and crowds at its launch sites, China is ready for liftoff.

At 8pm Beijing time on 25 June this year the tropical darkness over China’s Hainan province was temporarily banished by a blinding orange light. Accompanied by the thunderous roar of engines, a 53m-tall rocket pushed itself into the sky.

An increasing number of Chinese rockets have launched in the past few years but this one was significant for three reasons. It was the first launch of the new Long March 7rocket, designed to help the Chinese place a multi-module space station in orbit. It was the first liftoff from China’s newly constructed Wenchang launch complex, a purpose-built facility set to become the focus for Chinese space ambitions. And it was the first Chinese launch where tourists were encouraged to go along and watch.

For a space programme that has long been shrouded in secrecy, it’s a major step. The Wenchang complex has been designed with large viewing areas, and in the sultry heat of that June night, tens of thousands of spectators stood cheering as the rocket began its 394km journey above the Earth and into orbit.

“China is developing very rapidly into one of the major space players,” says Fabio Favata, head of the programme coordination office at the European SpaceAgency’s (ESA) directorate of science.

China launched a pioneering “hack proof” quantum communication satellite, calledQuantum Experiments at Space Scale, on 16 August from its older Jiuquan launch centre in the Gobi Desert. This is the first large-scale satellite designed to investigate the weird quantum phenomenon called “entanglement” that so unnerved Albert Einstein he once called it “spooky”. In addition, China is preparing to launch another new rocket design, a new space station, an X-ray telescope and a crewed mission before the year is out.

China is estimated to spend around $6bn a year on its space programme. Although that is almost $1bn more than Russia, it is still a fraction of the American space budget,which is around $40bn a year. Despite its large budget, the US made only 19 successful space launches in 2013, compared with China’s 14 and Russia’s 31. With numbers like this, it is clear that China has arrived in space, and is set to become stronger.

“You will see the Chinese quite visibly begin to match the capacity of the other spacefaring powers by 2020,” predicts Brian Harvey, space analyst and author of China in Space: The Great Leap Forward . Key to this will be the large manned space station, Tiangong, which they plan to have in orbit by then. Although not as physically large as the International Space Station America, Russia, Europe, Japan and other countries have been building and using since 1998, China’s space station will have a broadly similar capacity to perform science.

Perhaps most impressive is the broad front on which the Chinese space programme is advancing. They are making strides in everything from human space flight to space science and planetary exploration.

So do the Chinese want to take over space? Brian Harvey, space analyst and author of China in Space: The Great Leap Forward, believes the Chinese simply want to be seen as equals. “To use a Chinese phrase, I think they are wanting to bring their own mat to the table,” he says. “They are looking for equality, they want respect from the world’s space community.”

To that end, China’s biggest inroad has been made with the ESA through the space science programme. Soon after the turn of the century. ESA launched the Cluster mission to study so-called “space weather” and the electrical malfunctions this could cause on satellites. The Chinese were keen to learn more about space weather too and came to the European agency with a proposal: they would build extra satellites to enhance the Cluster mission if ESA would collaborate with them.

“They understood that space weather was a key challenge as we rely more and more on technology in orbit,” says Christopher Carr, a physicist at Imperial College, London, who worked on the Cluster mission. ESA took care of the negotiations, allowing scientists, including Carr, to build the instruments unhindered. Although there were some differences in working methods that had to be ironed out, Carr says: “Overall it was an enjoyable collaboration.”

China has gone from strength to strength. In December 2015, it launched the Dark Matter Particle Explorer, a satellite to look for the mysterious non-atomic matter that astronomers believe makes up a large fraction of the universe. This December, it plans to launch the Hard X-ray Modulation Telescope to look for black holes. ESA and China are working together on a new mission – the Solar Wind Magnetosphere Ionosphere Link Explorer (Smile), which is slated for launch in 2021.

The Chinese know that the value of these collaborations extends way beyond the science. “We are the newcomers in space science, and don’t have much experience,” says Wang Chi. “International collaborations are the shortcut for China to catch up with the world. In addition, science, especially space science, should be the responsibility of all humans around the globe. International collaboration is the effective way to obtain the maximum science return from any space mission.”

Favata agrees: “At ESA we collaborate with all major spacefaring nations. If Smile works well it is likely to be the pathfinder for future missions.”

In stark contrast is America, where there is a blanket ban on working with China that dates back years. The most obvious consequence of this has been the exclusion of China from the International Space Station. But far from slowing the Chinese down, the cold shoulder has actually speeded them up.

Circling above us at the moment is the disused shell of China’s first space station. The eight-ton Tiangong 1 (Heavenly Palace) was launched on 29 September 2011 and hosted two three-person crews between 2012 and 2013. It is now abandoned and expected to re-enter Earth’s atmosphere some time later this year.

The Chinese will launch Tiangong 2, a second test station, next month. It will lead to a substantial orbital facility that will be in use by 2020. Known simply as Tiangong, it will be a key base for space research, with two large science modules joined together by a connecting service module.

“They can do a lot of science on it. It will have a research capacity that the ISS didn’t reach nearly as quickly,” says Harvey.