AS the world celebrates another Workers’ Day tomorrow, the Organised Labour has stated that Nigerian workers had not actually benefited from the increasing wealth of the nation, while poverty among the working class has continued to increase.

This was as the Labour demanded the immediate recall of Honourable Ayeola Abdulkadir Abayomi, representing Ibeju-Lekki, Lagos State, from the House of Representatives for his recent attempt to smuggle in a bill to remove the issue of national minimum wage from the Exclusive Legislative List, after the constitutional issue had been resolved in 2014 by the National Assembly.

Speaking at the 2017 Pre-May Day lecture jointly organised by the Nigeria Labour Congress (NLC) and Trade Union Congress (TUC), at the Labour House, Abuja, the NLC president, Comrade Ayuba Wabba and his TUC counterpart, Comrade Bobboi Kaigama, painted a gloomy picture of the situation and condition of workers under the worst economic condition over the years.

Ayuba said: “Labour creates wealth, and the wealth has increased but as workers in Nigeria, what has been our condition; have we actually benefitted from the wealth of the nation?

“In fact, poverty among working class has continued to increase. We are just a pool of poor workers and therefore, I think this year’s May Day calls for us to dedicate ourselves both as leaders and members to our collective struggle to continue to agitate for what is right to our society.

Ngige commends workers’ resilience in the face of economic hardship

Meanwhile, the Minister of Labour and Employment, Senator Chris Ngige, has commended the resilience of the workers in the face of the current economic challenges facing the country, hoping for a better future.

In his May Day message to the workers, the minister fraternised with Nigerian workers, saying the Workers’ Day “is a day that has its origin in the historical struggles of workers and trade unions in their efforts to win fair employment standards and more importantly, to establish a culture of human and workers’ rights.”

According to Ngige, “the Federal Government is not unaware of the economic challenges facing Nigerian workers in the public, the private and informal sector of the economy. We appreciate your resilience and hope for better days ahead.”

While acknowledging the contributions of the Nigerian workers to national development, Ngige emphasised the commitment of the present administration to the enhancement of workers welfare.

He said: “Mr. President is committed to the enhancement of workers’ welfare, through programmes like the Federal Integrated Staff Housing Scheme (FISH), creation of enabling environment to stimulate the economy with the aim of improving the social-economic wellbeing of Nigeria in all sectors of the economy.”

Also speaking, the TUC president queried: “Why is it that politicians, from councillors to the highest offices, are earning the same salary. The ability of the state was not put into consideration, whether the state is viable or not, whether they have resources or not, they still collect the same salary structure. Why should they make the workers the scapegoats.

“If it is a question of availability of resources; that should also be a consideration but what we are even saying is that it is not the same salary structure; we are talking of minimum. Even in the most capitalist economies, we have minimum wage, which is to protect the most vulnerable and it cuts across both public and private sectors so that we don’t leave it to employers to fix whatever they want,” Kaigama said.

The TUC president also lamented the poor working and general condition of Nigerian workers, saying that every economic indicator pointed to the fact that Nigerian workers “can no longer survive on a meagre N18,000 minimum wage.”

In his paper, the keynote speaker, Professor Olutoye Olorode, said recession in Nigeria had become the excuse for imposition of further and highly disproportionate economic burden on the working people and other oppressed classes world-wide.

Olorode said the crisis “is essentially a product of the domination of Nigeria by global capitalism with its ideology of the rule of market forces, liberalisation, globalisation and the rule of international finance institutions.” 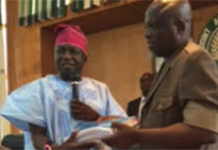