JOSE Mourinho was on Tuesday accused by Spanish authorities of failing to pay 3.3 million euro ($3.7 million) in taxes at Real Madrid as star player Cristiano Ronaldo was summoned to appear before a judge next month.

The 54-year-old Mourinho, who coached Real Madrid from 2010 to 2013, was accused of “two offences against the public treasury,” the prosecutor’s office said in a statement.

The 32-year-old Portuguese star is facing four charges of fraud through offshore companies between 2011 and 2014.

The hearing will take place at 09:00 GMT on July 31 in a court at Pozuelo de Alarcón, in the suburbs of Madrid, according to Spanish press reports.

Prosecutors accuse the Portugal international of evading tax via a shell company based in the British Virgin Islands and another in Ireland, known for its low corporate tax rate.

In addition, they say he only declared 11.5 million euros of Spanish-related income from 2011 to 2014, while what he really earned during that time was close to 43 million euros.

And finally, they accuse him of “voluntarily” refusing to include 28.4 million euros in income linked to the sale of his image rights for the 2015 to 2020 period to a Spanish company.

The four-time world player of the year, who said last week his “conscience is clear”, is threatening to leave Real Madrid over the affair.

Ronaldo is currently on duty for Portugal at the Confederations Cup in Russia which ends on July 2.

Both Ronaldo and Mourinho are clients of football super-agent Jorge Mendes, who has been summoned to appear before the court at Pozuelo de Alarcon on June 27.

The football world in Spain has been rocked by charges of tax evasion or corruption pressed against some of its top stars.

The prison term will be suspended as is common in Spain for first offences for non-violent crimes carrying a sentence of less than two years.

The 29-year-old and his father Jorge Horacio Messi were found guilty of using companies in Belize, Britain, Switzerland and Uruguay to avoid paying taxes on 4.16 million euros of Messi’s income earned from his image rights from 2007-09.

Meanwhile Brazil star and Barcelona forward Neymar and his parents are due to stand trial for alleged corruption over his transfer from Santos in 2013. 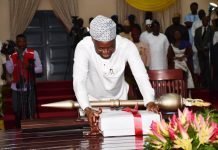 2019 AFCON Qualifier: Bafana Coach Out To Prove A Point Against...