SOME electorate in Kogi, have approached a Federal High Court in Abuja to declare the return and swearing-in of Alhaji Yahaya Bello as the governor of Kogi as null and void.

The suit, number FHC/ABJ/C3/535/ /2017, was filed on June 16 before Justice John Tsoho of the Federal High Court 3, Abuja, according to documents made available to newsmen on Tuesday in Lokoja.

Other defendants in the suit are: the All Progressives Party (APC), Peoples Democratic Party (PDP), Independent National Electoral Commission (INEC) as well as the Minister of Justice and the Attorney-General of the Federation. In the originating summon supported by a 19-paragraph affidavit, the petitioners are asking the court to remove the governor on grounds that he is not a registered voter in Kogi.

The petitioners also urged the court to remove Bello on the grounds that he was not validly nominated in writing to contest the 2015 governorship election by any registered voter in the state.

They contended that this was in accordance with Section 32 of the 2010 Electoral Act as amended.

Elokun, Sule and Adamu want the court to affirm that since Bello was not a registered voter in Kogi, he could not be nominated for any elective position or be voted for by the electorate in the state.

On this premise, the petitioners are asking the court to declare as null and void the declaration of Bello as the winner of the governorship election held in the state in 2015 by the INEC.

No date had been fixed to hear the suit. 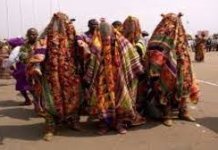